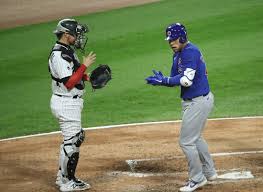 James Anderson of Corvallis, Oregon, and Austin Willson of Enumclaw, Washington, became the latest two signings for the ‘Jackets, bringing the total number of recruits for next year to seven. Both players will come to MSUB after spending each of the last two seasons at Skagit Valley College in Mount Vernon, Washington.

Anderson was last on the field in the summer of 2020, playing for the West Linn Knights in Oregon. He held a .302 batting average with a pair of home runs, 10 RBIs, and a .940 OPS over the summer.

In the shortened 2020 collegiate season, Anderson played in 11 of 12 games for Skagit Valley College before the coronavirus pandemic abruptly canceled the remainder of the campaign. Anderson was the team’s top hitter through the first 11 games of the year, hitting .382 with two home runs, 10 RBIs, and 12 runs scored and posting an OPS of 1.100.

Prior to his time at Skagit Valley, Anderson spent two years at fellow Great Northwest Athletic Conference school Western Oregon University. As a true freshman in 2018, Anderson saw action in 15 games and had one hit.

Anderson enjoyed a decorated prep career at Crescent Valley High School and was a first-team all-state catcher during the 2016 season. Anderson hit above .400 in each of his prep seasons, with a career-best single-season average of .458. He led the state of Oregon in home runs in 2016 and hit nine in his career. He was a two-time first-team all-league catcher, and competed for the Corvallis Marketmen during the summer. In addition to his baseball career, Anderson played corner back and strong safety on the Raiders’ football team for two seasons.

Coach Waddoups on Anderson: “James is a high-character game-changer. He has the ability to really impact the baseball. It is exciting to add a guy like James to our ‘Jackets family who can quickly change the game with one swing.”

Anderson on choosing MSUB: “I chose Montana State University Billings because of the culture and atmosphere they present. With the prior knowledge I have about the GNAC, I’ve been aware of MSUB for quite some time. The competitive and winning environment which MSUB presents creates a high-level atmosphere which shows how passionate the players and coaches truly are about the game. When I decided to commit, all of the coaches and even players reached out to congratulate me, and that’s when I knew I made the right decision.”