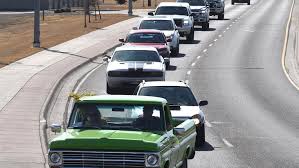 BILLINGS – A memorial cruise was held Sunday to honor the memory of Kylie Larsen, Tommy Lindsay and Connor Devere, the teens killed in a car accident just a few weeks ago in Billings.

“Remembering them, their special traits, their personalities, their love they have for everybody, and this community is pulling together showing exactly what this community can do,” Melody Lindsay, mother of Tommy Lindsay, said.

Hundreds of Billings residents met at the Kohl’s parking lot Saturday morning for a memorial cruise hosted by Cars and Coffee to honor the passing of 16-year-old Conner Devere, 17-year-old Tommy Lindsay and 18-year-old Kylie Larsen.

Tommy’s girlfriend Melanie Tecca, his best friend Zac Malcolm and mother Melody Linsday, say they are overwhelmed by the outpouring of support from the Billings community and wish Tommy could see it for himself.

“I think number one he’d be shocked as all get out, but I think he would be smiling big,” Melody Lindsay said.

“Just to see everybody here who does love him and support him would be… he’d love it,” Melanie Tecca said.

Several local motorcycle clubs lead the cruise down Grand Avenue, then back up Central Avenue, before meeting at Billings West High for a ceremonial release of West colored balloons.

Students and parents from Billings Senior High stood side by side with the Billings West community, watching the balloons fly away, while thinking of the three teens taken far too soon.

“Thank you so much for your generosity, the love, the prayers, the financial, just most of all the support that you have given to one another in this community. Just hug your loved ones and don’t take for granted anything because it can all change in the blink of an eye,” Melody said.

Billings Police Officers respond to area of 1st Ave. N for a shooting