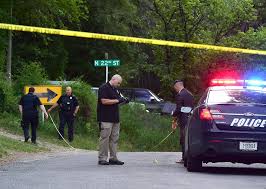 BILLINGS, MT – A Billings man was arraigned in Yellowstone County District Court Tuesday on charges related to an incident on Sunday, March 7th.

According to charging documents, two Billings Police Officers were dispatched to a home on the 2200 block of 6th Avenue North on a report of a man swapping out fictitious license plates on a car.

The charging documents state that the officers identified a red car with plates registered to another vehicle.

One of the officers attempted to make contact with the occupant of the home by knocking on the door and ringing the bell. But, shortly after she heard a door close on the side of the home.

The charging documents state that when the officer returned to front of the home, the red car was running and shifted into reverse.

The officer reports that she slapped the car to make the driver aware of her presence and opened the vehicle’s door to order the driver, Austin Cody Aisenbrey, to turn the vehicle off.

The officer says that she saw a large dog in the passenger seat of the vehicle, so she did not reach in to pull the driver out.

According to police, Aisenbrey instead put the car in reverse nearly striking both officers and ramming a parked truck. The red car then became stuck allowing one of the officers to fire their taser and to take the suspect into custody.

Correction: This article initially identified the vehicle being hit as a police car. The vehicle struck was a parked truck.