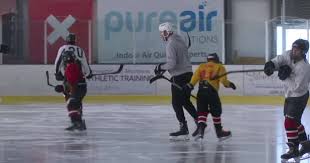 MISSOULA — Sports are currently on hold for the most part, however, earlier this month the Glacier Ice Rink in Missoula put a sheet down for the rest of summer.

Missoula Bruins coaches and players are holding youth and adult camps as well as other instructors. One of those camps is being put on by Build Your Game Missoula, a hockey training camp designed by Mike Anderson. One of the instructors at BYG this summer happens to be a Montana native who is currently pushing to make it to the NHL.

Jake Doty grew up in Billings before he moved away at age 15. There he learned the basics of the game he’s grown to love and excel at.

“You know, youth hockey in Montana is a special thing,” said Doty. “There’s not very many hockey players, compared to around the country. You form great relationships with people from other cities. I still have a lot of friends from my minor hockey or youth hockey days that I keep in touch with still to this day.”

Doty has played in four different developmental leagues for the NHL in his 7 years as a pro, including his current stop in the AHL.

While he’s still focused on making the NHL, The Billings native comes back to Montana in the summer for youth camps each year.

“It’s always fun to come back to Montana and help out youth hockey,” said Doty. “Something I remember fondly as a youth player, you know doing these camps and having older people to look up to and being from Montana makes it that much more special.”

While he gives a lot of time to growing the game, Doty also has to balance finding time for his own training, especially during a pandemic.

“I have to have a lot of discipline in my own training, you know working out by myself and running,” said Doty. “I don’t have the tools, maybe people or players from other cities or states have. So, I kind of have to get creative with my strength and conditioning and I do it all myself. So I just have to stay disciplined in that and make sure I’m ready to go when the season comes if the season comes.”

Doty will be lacing them up for the Ontario Reign, the AHL affiliate of the LA Kings, in 2020. Doty also offers his own private lessons here in Missoula this summer. You can contact Jake at (406) 670-9773 or email him at jdquake24@yahoo.com