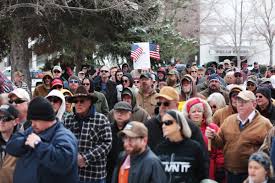 BILLINGS, Mont. – Billings leadership held a news conference Thursday to address this Sunday’s protest honoring the life of George Floyd.  The protest is set for June 7, 2020 on the lawn of the Yellowstone County Courthouse.

Billings Police Chief Rich St. John says the department supports people’s rights to protest peacefully, but they will not tolerate any criminal behavior.

“What took place on May 25th was exceptionally difficult to watch – outwardly unjustified – certainly unnecessary – and frankly criminal,” says Chief St. John, “And it is appropriate that on the day of George Floyd’s memorial that we acknowledge that we must do better and that we hear the message.”

St. John stood side by side at a news conference with rally organizers Thursday saying they will work together to keep this weekend’s protests peaceful.  St. John says the Billings Police Department and the Yellowstone County Sheriff’s Office are deeply disturbed by the destructive and violent protests around the country.

“Mr. Floyd’s death is truly a tragedy, but violence and destruction are never the answer,” he says.

Billings Mayor Bill Cole was also at the press conference, and acknowledged the need to spread education and awareness.

Mayor Cole also noted we are still in the middle of a pandemic and he brought several hundred face coverings, giving them to event organizers to hand out during the rally on Sunday.

Amber Palmer, one of the event organizers, says, “We just want to bring awareness to people in Montana that racism does exist.  We also want to bring tools to people to learn about that, how to deal with it, how to stand up for it, and how to make it stop.”