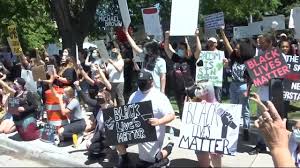 Under this broad category, you’d throw in events like the “canceling” of celebrities, from J.K Rowling to Lana Del Rey. Then, you’d want to add those who are boycotting the NFL, or social media, or Netflix. More importantly, though, you’d acknowledge the protests we’ve seen all across the world for Black Lives Matter and racial social justice, and across America regarding the coronavirus pandemic (interestingly, this one has elicited protests both for and against health protections). As someone who works “in the media” it’s been difficult even for me to stay caught up on everything going on and the public’s temperature on, well, anything.

So when I saw this story from Mic, I have to say I felt relieved. They’re reporting that a new study “of more than 10,000 protests this year found 95% were peaceful” citing a report from the Armed Conflict Location and Event Data Project and Princeton University’s Bridging Divides Initiative.

First, 10,000 protests in one year is a lot of protests. But that 95% of them were peaceful? That’s incredible and heartening. However, I don’t think it should be surprising.

This summer I attended two protests in Billings. The first was the Justice for George Floyd & BIPOC In Our Community/World protest. As I wrote in an article about it back in June, I was so proud of our city that a protest of that size, the largest our city has maybe ever seen, remained peaceful. Especially due to the speculation leading up to the event about groups that might try to create chaos (which turned out to be false). For the second, I took pictures of a protest organized by the Montana Sports Fans Alliance. They too were peaceful in their demonstrations. And in both cases, there were changes made, arguably as a result of the protests (or collective protests in the case of Justice for George Floyd).

I hope this inspires or continues to inspire Generation Z and all generations to speak their minds, to vote, and to keep exercising their first amendment rights.