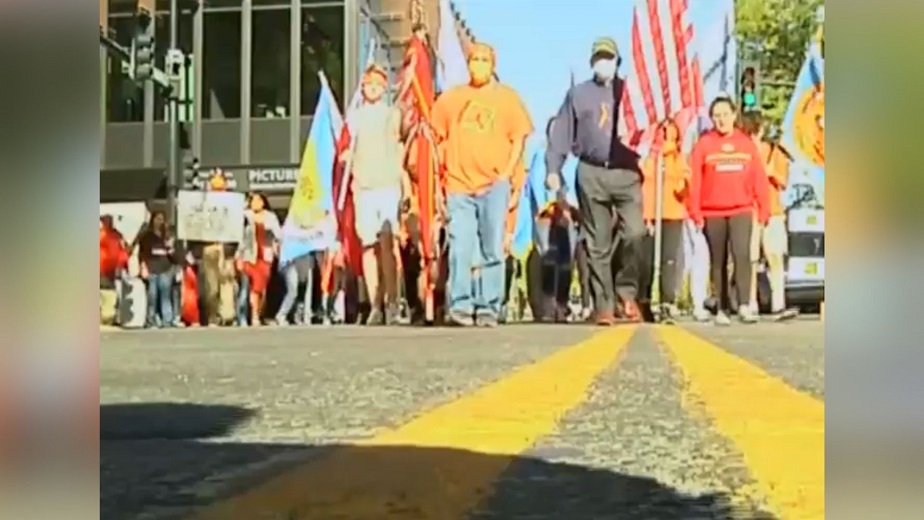 Billings, Montana – Thousands of unmarked Indigenous graves are continually being discovered at former residential boarding schools across Canada and the United States.

A ceremonial walk was held in Downtown Billings on Friday in an effort to take the initial steps toward assisting individuals in the Native American community heal from the atrocity.

Friday’s walk wasn’t only about healing for many Native Americans; it was also about recognizing and honoring the 6,000 or so Indigenous remains currently being retrieved from boarding schools.

On American Indian Heritage Day, dozens of Billings citizens and members of the Native American community dressed in orange for the first annual Healing Walk.

The goal of Friday’s gathering was to commemorate the hundreds of Native American graves discovered in old Indigenous residential boarding schools.

“Seeing the kids playing around while walking almost made me cry thinking of the kids that couldn’t play and couldn’t experience what we do today,” Billings resident Jayson Fisher said.

According to the Billings Urban Indian Health and Wellness Center, the event’s goals were to grieve, remember, pray, reconcile, and move ahead united.

“I felt the love, all the people that showed up today for our first inaugural healing walk,” said Josiah Huggs, the community prevention coordinator with Billings Urban Indian Health and Wellness Center.

“I hope that it brings us together and heals us. I think this a great way to heal,” said Fisher.

“There is a lot of other minorities in the community, and I think it’s important that we stick together,” Billings resident Marlynn Cloud said.