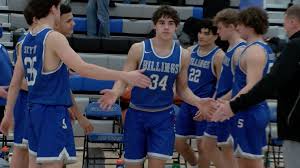 BOZEMAN — Tuesday night’s Eastern AA boys basketball matchup between Billings Skyview and Bozeman Gallatin was supposed to go down over the weekend, but the Falcons couldn’t make the trip due to weather-related reasons. The Falcons rescheduled for Tuesday and rolled past the Raptors 70-36.

Gallatin had only one player finish in double digits, sophomore guard Eli Hunter with 10 points.

With Tuesday night’s win over Gallatin, Skyview improves its record to 7-2. The Falcons sit tied for second in the Eastern AA, sharing the spot with Bozeman High, which picked up a win over Billings West on Tuesday.