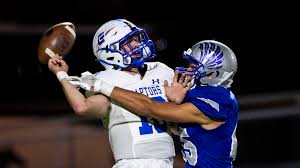 BILLINGS — Billings Skyview scored 27 unanswered points in the second half, fueled by two defensive touchdowns in the first two and a half minutes, to rout Bozeman Gallatin, 47-14, in Eastern AA football action on Thursday night at Daylis Stadium.

Leading 20-14 at the break, Skyview’s defense played inspired football in the third quarter. Caleb Partridge got the party started with a scoop and score to put Skyview up 27-14, then a Peyton Sanders pick-six pushed Skyview’s lead to 20.

On offense, Skyview rode its ground game for the majority of the night, churning out big gain after big gain behind a physical front.

It was Gallatin that struck first, though, as the Raptors capitalized on a Skyview fumble. After marching down the field, Braeden Mikkelson hit Michael Armstrong down the right sideline for the game’s opening score at the tail end of the first quarter.

The Falcons had a quick answer. Reigan Picicci opened the second quarter with a burst right up the gut for an 18-yard score to even things up. After a Gallatin three-and-out, Skyview again drove down the field. Quarterback Dylan Goodell finished the drive off with a 5-yard scoring run to put the Falcons up 13-7.

Then the Skyview defense began to bear its teeth. A strip-sack by Kailua Fatupaito resulted in a touchdown for Skyview as he fell on it in the end zone for six to go up 20-7. Gallatin scored just before the end of the first half on a Mikkelson 6-yard pass to Noah Dahlke, but that was all the offense would be able to muster on Thursday night.

Skyview looked like it wanted to get aggressive to end the half, but Goodell went down with an ankle injury with 29 seconds left and had to be carried off by his teammates. He did not return to the game.

In stepped Jaylen Baker, who has experience starting at quarterback for the Falcons. Baker tossed two second-half touchdowns in his switch from wide receiver to ice the game.

“I appreciate all their support. They make me who I am,” Baker said of his teammates. “We played as a team, as a unit. That’s huge.”

Skyview has won consecutive games for the first time since 2017.