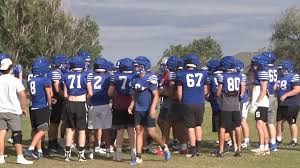 Last Friday night must have felt pretty good for the Billings Skyview football team. The Falcons snapped a 22-game losing streak with a 20-0 win over Great Falls CMR, winning for the first time since 2017.

“These guys didn’t have a lot to do with 0-22. This is a different team. This is team 35. We’re trying to focus on what we do. We were 0-2,” Billings Skyview head coach Nathan Wahl said. “I think in our mind we knew we could make some things happen. It was nice to put one together. It wasn’t perfect, but good teams win even though they don’t play perfectly. I hope it takes some pressure off of our kids, because I know regardless of how many times I say it, they still get it from everywhere else, so I think that was really relieving for them to just see what their hard work can do.”

“It was amazing. You can see it out here at the practice field, it’s huge for everyone,” Skyview junior lineman Hunter Nixdorf said. “Twenty-two games losing, I’ll be honest, it sucks, but getting that first one, it’s something special.”

Grinding through two-a-days in the heat, early morning workouts and frigid fall practices was validated with last weekend’s victory. Wahl said his group has believed since Day 1 and complacency hasn’t crept in.

“There’s definitely a little more pep in their step after a victory, and I think that’s whether you’re winning the first one after a while or winning week to week, it’s always easy to come back to practice after a win,” Wahl said. “That’s nice for our kids to be able to feel that, but for a team that hasn’t experienced winning at the varsity level, these guys do it pretty darn well in the fact they don’t let it go to their heads and they’re working their tails off.”

Skyview gets a chance to start a new streak of sorts on Thursday night when the Falcons host Bozeman Gallatin.

“We’ve just got to repeat what we did last week. Keep working on what we’ve been doing for years now under coach Wahl,” said senior lineman Keevyn Alexander. “He’s been a great coach. We’ve just got to follow the techniques and the fundamentals and we’ll be fine.”

Gallatin and Skyview are slated to kick off at 7 p.m. at Daylis Stadium in Billings on Thursday night.

School administrators in Billings announced Thursday that some students from Billings Skyview High School will be allowed to attend the football game against Bozeman Gallatin High School.

The district will allow 200 Skyview students into the game on Thursday.