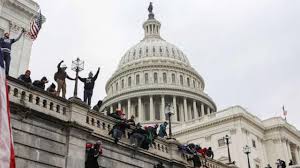 HELENA Mont.  — Two Montana brothers who prosecutors have said were among the first people to enter the U.S. Capitol while Congress was certifying the Electoral College vote were ordered detained Monday until the U.S. Marshals Service can transfer them to Washington to face federal charges.

Joshua Calvin Hughes, 37, and Jerod Wade Hughes, 36, both of East Helena, made initial appearances before U.S. Magistrate John Johnston in Great Falls. He ordered them detained pending their transfer.

The brothers were among the first people to enter the U.S. Capitol through a broken window on Jan. 6, the the FBI has said in charging documents. Jerod Hughes helped kick open a door to allow other rioters inside, prosecutors said.

The brothers were immediately behind the primary aggressor who pursued Capitol Police Officer Eugene Goodman up the stairs of the building, investigators said. Goodman managed to bait the mob away from the Senate floor, which had not yet been evacuated.

The brothers later found their way onto the Senate floor, where they sat in senators’ chairs and opened their desks, charging documents said. They were captured in numerous images and videos from the riots, court records said.

The men reported to the Helena Police Department on Jan. 11, saying they had seen themselves on news coverage and believed they were wanted by the FBI, court records said.

The brothers said they wanted to speak with an attorney before talking with the FBI and they were not immediately taken into custody.

A complaint alleges the brothers obstructed an official proceeding, interfered with a law enforcement officer, entered a restricted building and damaged or aided in damaging property of the United States.

The brothers did not enter pleas. Their attorney, Palmer Hoovestal, did not immediately return a phone message seeking comment.