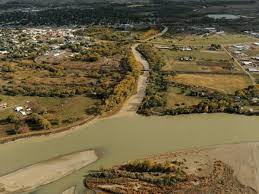 A newly formed group in southeast Montana is drumming up support to add and improve river access, camping and roads along more than 160 miles of the Yellowstone River.

The Lower Yellowstone River Coalition formed earlier this year to support economic development and expand tourism along the river corridor east of Billings.

Christine Whitlatch, the group’s spokesperson, says the proposal asking Montana Fish, Wildlife and Parks to designate the 163-mile river stretch as a recreational management unit was borne out of conversations she had earlier this year with people living from Hysham to Fairview.

“And I really think it’s this hidden secret that we’re finally opening a window and letting everybody peek at,” she said on a press announcing the proposal July 14.

Proponents, including tourism and county officials and area residents, say increased opportunities for recreation and access to nature would not only boost local economies hurting from rural flight, but improve health and quality of life, as well as potentially attract people hoping to relocate to more rural areas as the novel coronavirus pandemic rages on.

The Lower Yellowstone River Coalition plans to present its proposal to the Montana State Parks and Recreation Board in December.

Lawmakers would need to take action next session to fund projects.

Billings police will not write citations for not wearing masks