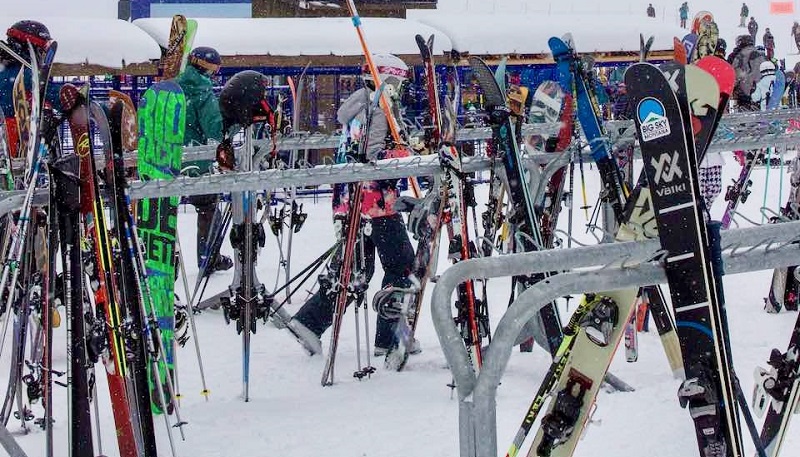 The resort was receiving several inches of snow as of early Wednesday morning, and there were long lines of anxious skiers waiting to board the Swift Current Lift.

“Opening Day is such a fun Big Sky tradition,” says Big Sky Resort PR Manager, Stacie Mesuda. “Normally we open on Thanksgiving Day but we are opening a day early this season which is super exciting. Mostly because we just got a ton of snow and as you can see it’s still coming down. We’ve gotten almost six inches already this morning and it is still dumping.”

According to Mesuda, Big Sky Resort has received a significant amount of snow so far this season compared to the previous.

“This fall we’ve gotten over five feet of snow already. This is setting us up for a great base plus with our investments in snowmaking recently we’re able to open up 2,000 acres of terrain for our opening weekend. Very exciting,” says Mesuda.

Mesuda says she is looking forward to a long and enjoyable season and is extremely eager to go skiing a little early this year.

The prospect of returning to the slopes excites Mesuda. “The start of the ski season is always extremely exciting because you have around 150 days of skiing ahead of you. I love to be on the lifts and skiing with my friends and it’s just the best way to spend the winter,” the skier said.

Mesuda said that the current weather is excellent and that she even got to see a sneak preview of the runs prior to the official launch.

“I went out for a couple runs yesterday. We had great coverage on all our groomed runs for the lower mountain thanks to all this natural snow and snowmaking and then plus all this powder today. It’s going to be excellent out there,” says Mesuda, “I can’t wait to go take a couple runs!”

Bicyclist died at Deer Lodge after being struck by a car

More accurately than ever, a new surgical robot at SCL Health in Billings is diagnosing lung cancer