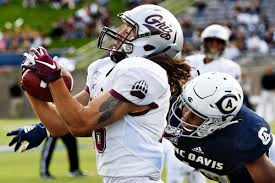 EDMONTON, Alberta — Jerry Louie-McGee, a record-breaking wide receiver at Montana, signed as a free agent with the Edmonton Football Team of the Canadian Football League on Monday.

Louie-McGee, who joined the Griz as a redshirt in 2015 and played form 2016-19, was named to the EE Football team’s negotiation list in September.

The 5-foot-9, 171-pound wide receiver is Montana’s all-time leader in pass receptions and finished his UM career with 230 catches for 2,277 yards to break Raul Pacheco’s record of 192 career receptions.

Louie-McGee also holds a UM, Big Sky Conference and FCS freshman record with 21 catches in a single game, setting the standard against Cal Poly in 2016. He holds the Grizzly record for average receptions per game in a season with 9.1, also established in 2016.

Louie-McGee is the second Griz to sign a CFL contract since the team advanced to the FCS quarterfinals in 2019, joining QB Dalton Sneed, who signed with Winnipeg in March.

Edmonton’s general manager is former Griz Brock Sunderland. Sunderland is a native of Great Falls and was a wide receiver and put returner at UM from 1998-2000.

Louie-McGee is from Coeur d’Alene, Idaho. He also excelled on special teams while at UM and is tied for the most punt returns for a touchdown in school history with three. Louie-McGee is one of Montana’s top-10 all-time leaders in all-purpose yards with 3,685 in his career.