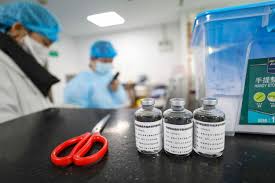 An experimental treatment for COVID-19 is showing signs that it may start working within 24 hours of its first dose.

NBC News reports the treatment is an antiviral therapy called remdesivir and is thought to work by blocking the virus from reproducing itself in the body.

Remdesivir is one of the potential treatments mentioned by President Donald Trump during a press conference on Thursday. He said health officials are working to remove barriers to try and roll out treatments as fast as possible.

Chris Kane, who was hospitalized in Everett with the coronavirus, was treated with remdesivir. The next day, his doctors reported improvements to his condition; he was able to be taken off a ventilator, his fever resolved and his cough slowly dissipated.

Other potential treatments for the virus are also under investigation, including a drug used to treat malaria called chloroquine and a combination of HIV drugs, lopinavir and ritonavir, sold under the name Kaletra.