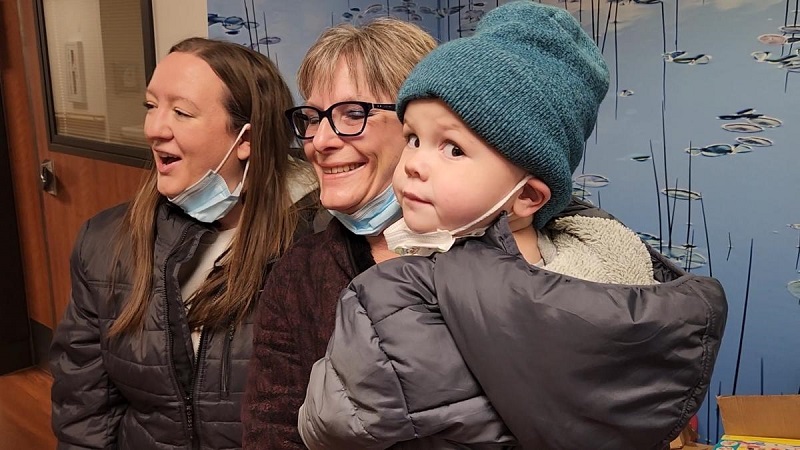 Billings, Montana – Zeke Acheson, 3, rang the bell on Thursday at the Billings Clinic Pediatric Unit to declare his cancer-free status, making it a significant day for the pediatric unit.

“The bell-ringing celebrations have always been one of my favorite things about my job,” said Clinic Pediatric Oncologist Dr. Breanna Breeding. “There’s a lot of hard days, but this really makes it all worth it.”

It marks the conclusion of Acheson’s 2.5-year odyssey. Hundreds of family members and friends joined in on the song “Last Day of Chemo.” Zeke appeared to want to ask, “What’s the big deal?” after ringing the bell, as was expected by this trooper.

“That’s his life, right?” said mom Marissa Acheson. “He knows nothing else.”

“Most of our kids that are younger like Zeke, they just want to be kids and want to play,” Breeding added. “So they tend to do a lot better during treatment.”

A toy is one thing that always seems to be helpful. In order to donate toys, Zeke’s family planned a drive and delivered over 200 today.

“While Zeke was in the clinic, I know the impact (toys) made on him and how much happier it made him,” Marissa said. “And the financial help was huge for us.”

“They’re going through things no kid should have to go through,” Breeding said. “So getting a prize or a toy after a poke or a procedure makes a big difference for them.”

The children at the pediatric center will receive the toys. Zekey’s Friends, a family foundation, has already collected donations to provide 11 families with gas and grocery cards and plans to organize at least one drive per year. It doesn’t take much to donate if you’d like to.

“They are usually little, small toys, but that’s enough to put a big smile on a kid’s face,” Breeding said.

What could be more contagious than being cancer-free?

Billings family hoping to get lost property back from June flooding