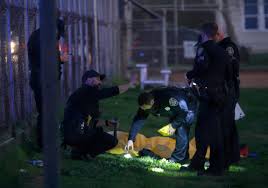 “There’s cops and US Marshals, I see my neighbor across the street in his driveway, Brandon, and the officers are telling him stay back, stay back and I mean, it was over like that,” says Diaz.

Lieutenant Brandon Wooley says members of the Montana Violent Offender Task Force were attempting to arrest fortune on a warrant for Deliberate Homicide out of Colorado. According to investigators the Kellen exchanged gunfire with six US Marshals as they attempted to make the arrest. Kellen died at the scene.

As one neighbor is seen consoling Kellen’s mother, she can be heard telling officers, “My son is dead” and ” I’m not leaving my son”. Kellen’s mother is said to have stayed next to her son’s body while officer investigated the scene.

Diaz says it very unusual for an incident like this to happen in their usually quiet neighborhood.

“To say it was a shock, is kind of an understatement,” says Diaz.

Wooley says investigators believe six members of the task force fired their weapons and all six are Federal Officers with the US Marshall Service.

No one on the task force was injured in the exchange of gunfire. The Billings Police Department is taking the lead on the investigation into the shooting.

New details emerge in case against man killed in Billings