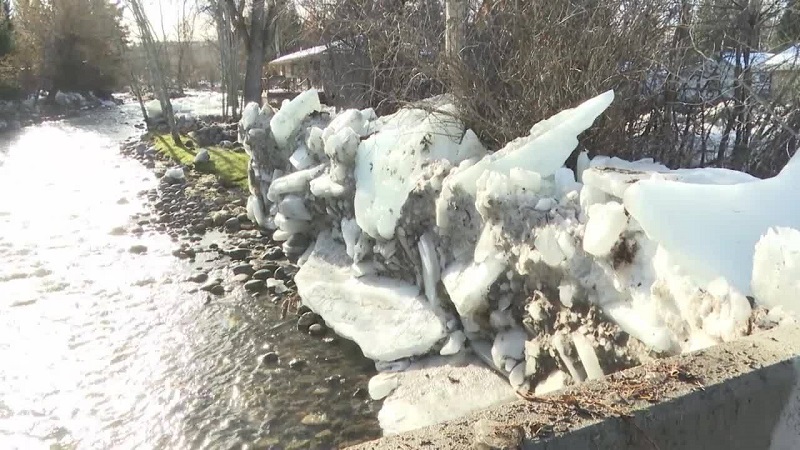 Fishtail, Montana – The little Montana hamlet of Fishtail has experienced significant flooding twice in one year, but this time the cause is ice jams.

When the temperature drastically changes, ice jams develop. Some areas of Montana experienced a weekend temperature spike of nearly 80 degrees, including Fishtail.

When the floods occurred on Christmas Eve in the afternoon, it was tough for business owners like Andy Simpson to relive some of the misery from this summer.

“It hit the bridge, didn’t have anywhere to go so it kind of hung a right and came here,” Simpson said. “Hit the building, hit neighbors’ houses, hit the post office. It’s just been an extreme year of flooding.”

Simpson’s company is located directly on the major thoroughfare in Fishtail. He is aware that it might have been far worse even though they lost their internet connection and some railing outside their building.

“We’re kind of blessed,” Simpson said. “You take the neighbors who’ve had their basements filled up with ice or decks took away and flooding in their homes, that’s the bad deal.”

It’s a distinct type of flash flooding since large chunks of ice are also carried by the rushing water. Simpson and other locals of Fishtail, like Charity Stephens, were astounded by how rapidly the water completed its path.

“I think what was most surprising for us is that this… this happened in 30 minutes,” Stephens said as she pointed to what used to be her backyard now covered in ice. “That shift in temperature caused ice to melt very quickly and it just released all of the ice off of the west rosebud causing kind of a tidal wave you would say.”

Stephens, who works as an EMS in the region, immediately took action with her family after learning that their home was secure.

“Once we kind of got our stuff stabilized, I said, ‘let’s go!’ and we all just hopped into our Tahoe and drove into town,” Stephens said.

Even though Fishtail has already seen a rollercoaster year, the inhabitants are proud of how their community has handled itself.

“As a community, we’ve seen it all this year – fires and floods – but we’ve also seen a huge step up from our community,” Stephens said.

“It’s just another bump in the road, but when you’ve got good friends and neighbors, you can always overcome,” Simpson said.

Students from Montana prepare for an archery tournament