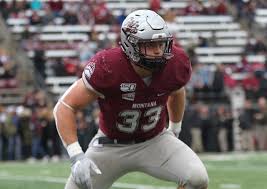 MISSOULA — Former Montana linebacker Dante Olson is getting another shot in the NFL, returning to the City of Brotherly Love.

Olson, who played at UM from 2015-19, was signed by the Philadelphia Eagles to their practice squad Thursday. This marks his second stint with an NFL team after he signed with Philadelphia as an undrafted free agent in April but was waived by the team Aug. 26, right before the season began. He later had his CFL rights claimed by Edmonton in case he wanted to try to play in Canada.

The move comes along with Philadelphia starting linebacker TJ Edwards (hamstring) and safety Rudy Ford (hamstring) being placed on injured reserve. They are two of 13 Eagles players on injured reserved, which means they have to sit out at least three games. That presents Olson with another opportunity to prove he belongs in the NFL.

Olson, 23, showed what he was capable of in college by winning the 2019 Buck Buchanan Award as the best defensive player in the FCS. The Medford, Oregon, native broke Montana’s single-season and career tackles records and the Big Sky Conference single-season tackles record in two years as a starter. He added 26 tackles for loss, 11.5 sacks, three interceptions, five forced fumbles and one fumble recovery.

Olson will join former Montana State linebacker Alex Singleton on Philadelphia’s roster. The Eagles are 1-2-1 and in first place in the NFC East, the worst of the NFL’s eight divisions; the four teams are a combined 3-12-1 while there are 12 of 32 NFL teams who have three or more wins on their own.

Olson is the lone ex-Grizzly currently in the NFL. Cornerback Trumaine Johnson, 30, was signed to the Carolina Panthers practice squad in September but was released less than a week later. He’s made 77 career starts in the NFL.