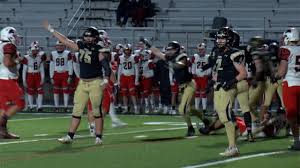 BILLINGS — Riley Bergeson refused to play the hero Friday night, even though that’s exactly what he was.

“It feels great, but I can’t take credit for that. It’s all them,” the Billings West junior linebacker said about his teammates.

But it was Bergeson who made two key fourth-down stops when West needed them most to secure a 24-17 Bears win and a berth in the State AA football championship. Bozeman faced fourth-and-2 at West’s 7-yard line with just less than three minutes to play and chose to hand the ball off to Brooks Talbot, but Bergeson met him in the backfield and stopped him short to force the turnover on downs.

After West had to punt the ball back to the Hawks with 1:20 to play, Bozeman faced another fourth down, this time opting to throw it deep, but it was Bergeson again who broke up the pass and clinched the win.

The senior opened the game with an interception on the second play, but it was negated because of a roughing the passer penalty. Bozeman would capitalize later in the drive, as Jordan Jones found Tucker MacBeth in the back of the end zone from 23 yards out to take a 7-0 lead.

The Hawks forced a punt on West’s opening possession, but on Bozeman’s first play of its second drive, Jess Wantenbarger fumbled and Caden Dowler recovered to put West in Bozeman territory. The Bears would drive to the 1-yard line where Michael DeLeon plunged into the end zone to tie the game at 7-7.

West took a 10-7 lead on the first play of the second quarter thanks to a Spencer Berger field goal. The Bears’ defense then gave the offense another short field, as Neil Daily intercepted Jones and returned it into Hawks territory. DeLeon again capped the ensuing drive with a touchdown run from 12 yards to give West 17 straight points and a 17-7 lead. DeLeon finished the night with 12 carries for 72 yards, including a key 29-yard run with less than three minutes to play to get West out from the shadow of its own goal line.

The Bears led 17-10 at halftime and throughout most of the third quarter, but Luke Fedyk scored on a 1-yard QB sneak with 20 seconds left in the quarter to once again tie the game at 17-17. That set up the play of the game.

West leading scorer Taco Dowler took the ensuing kickoff to the right, cut back inside a defender and outran the rest for a 96-yard TD that put the Bears on top for good.

The Hawks held the electric Dowler mostly in check on offense — he caught five balls for 68 yards — but he had three kick returns for 140 total yards, including what turned out to be the game-winning TD.

Wantenbarger led Bozeman 105 yards rushing, but Jones was just 11-of-25 passing for 113 yards.

West, the No. 1 seed from the Eastern AA, will host the Western AA’s top seed Missoula Sentinel in next week’s State AA championship game.