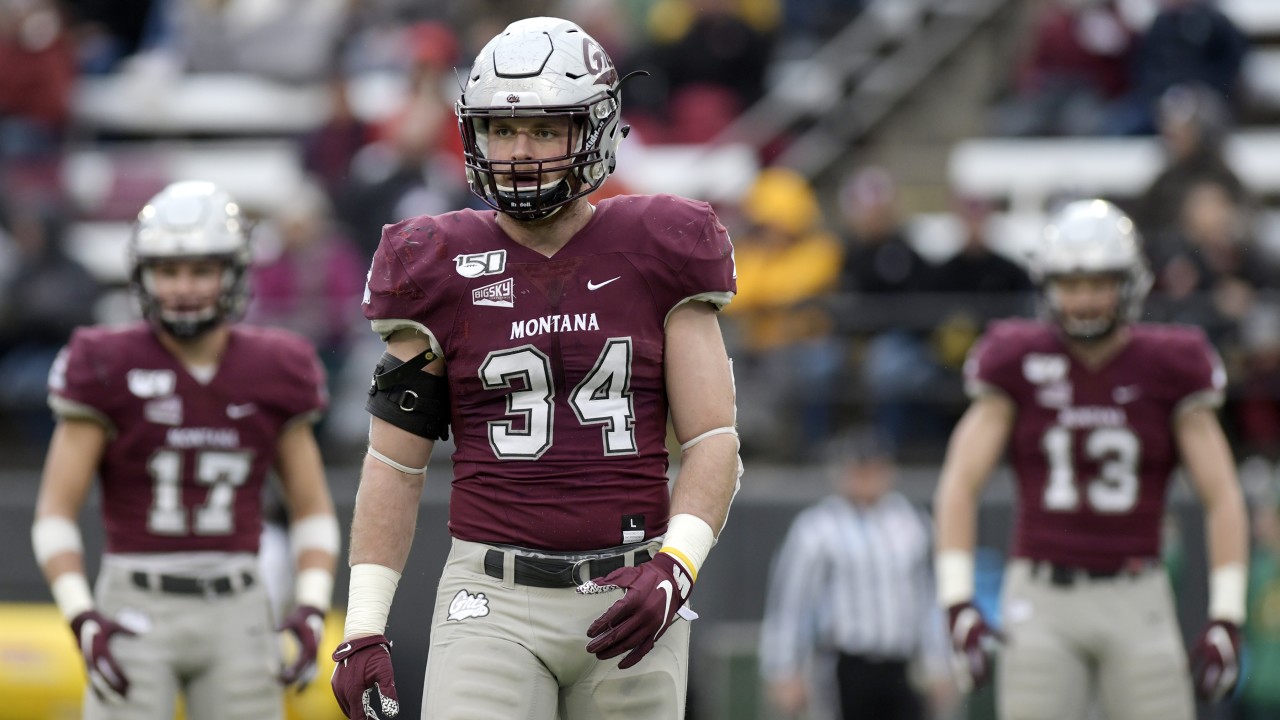 MISSOULA — Jace Lewis is ready to embark on his senior year with the Montana football team.

Now one of the team’s elder statesmen, even Lewis admits he’s starting to get old among his teammates.

“Feels like I’m an eighth-year senior almost with the COVID year,” Lewis said with a laugh. “But it’s been good.”

The Griz linebacker and Townsend native is poised to wreak havoc on opposing offenses once again for Montana, starting with Central Washington on Saturday in UM’s first of two spring games.

For Lewis and his teammates, it will be the first time in 16 months the Grizzlies will take the field for a game. The last time Montana fans saw Lewis on the field, he was capping off a meteoric rise for the UM defense in 2019, a season that saw him finish with 131 total tackles, 12 for loss, and 4.5 sacks.

A starter and anchor again for UM, Lewis’ rise comes after walking on with Montana in 2016 after graduating from Broadwater County High School where he was a three-sport athlete.

From walk-on to star, Lewis has followed in the path of Griz greats like Marc Mariani and Colt Anderson as players from Montana who just needed an opportunity to capitalize on.

“See, that’s something I take pride in,” Lewis said. “There’s a lot of people who doubted me and it’s just cool where I’m at right now from where I was when I started. It’s just a big accomplishment for me, and my parents always believed in me and stuff so that was always nice, but yeah, being a walk-on and always having that chip on your shoulder, it’s just something that comes with being a small-town kid and coming here I think.

“Coming out of high school, I wasn’t heavily recruited. Montana was always a place that I wanted to play because I was a huge fan. I came in with (Boulder native) Trase (Le Texier), we were pretty good buddies coming out of high school. We knew we had a lot to prove and we just kept our head down and had that blue-collar work ethic throughout.”

Lewis worked his way up from scout team to special teams to eventually cracking the defensive rotation. After flashing that potential in 2018, coach Bobby Hauck’s first year back at the helm, Lewis became a full-fledged starter in 2019, and for his efforts was awarded first-team all-Big Sky Conference at the end of the season.

Before the 2020 season was postponed, Lewis entered as the conference’s preseason defensive player of the year pick. That award put him in line with recent linebacker standouts Dante Olson and Josh Buss, two former teammates of Lewis who also earned that nod in 2019 and 2018, respectively.

“Certainly a bunch of us here have an affinity for small-town Montana guys that do well and we’ve had a bunch of those guys over the years,” Hauck said. “I think probably the best thing he’s done is he’s worked really hard to improve and I think he’s a much better player today than he was when we were standing out here four springs ago.”

Lewis is one of seven defensive players back with starting experience, and now in the fourth week of spring football he’s liked what he’s seen on that side of the ball.

“Defensively, we’re fast running to the ball and attacking,” Lewis said. “The corners are fast and physical. At linebacker, I think Marcus Welnel is going to have a big year this year. The group of linebackers we have, we’re really close and it’s a fun group to be around. The guys up front, they eat up a lot of double-teams so us linebackers can fly to the ball. Plus we have Robby (Hauck) and Gavin (Robertson) back. It’s just good to have everybody back and it’ll be fun this Saturday to see how well we do and I think everybody’s fired up.

“I’m a team guy so I just like the group of guys I’m always around. From the time I got here, especially in the linebacker room, all the guys have been great.”

Lewis, like the rest of the Grizzlies, now looks toward Saturday when Montana welcomes Central Washington followed by next week’s home contest with Portland State to cap off spring ball and the long layoff. Lewis added that he likes the change of playing a different team rather than constantly just squaring up against Montana’s offense.

While different than a normal year, Lewis said it’s just nice to be back in forward motion again.

“It’s been different the whole year and it’s not really a challenge, it’s just whatever comes our way we’re going to be ready for it,” Lewis said. “It’s been about 400-some days now since we played our last game. It’s exciting. Just knock the rust off and do what we do, stop the run, no explosive plays, and just have fun.