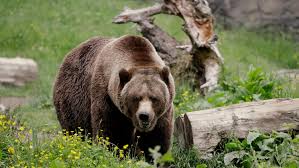 Wildlife officials say they have killed a grizzly bear after it killed a cow on private land in southwestern Montana outside Yellowstone National Park.

The adult male bear had killed a cow in Park County last week and was euthanized following consultations with the U.S. Fish and Wildlife Service. Grizzly bears are a protected species in the U.S. outside Alaska.

Montana Fish, Wildlife and Parks said it was the second removal of a bear this year in the area of the state around Yellowstone.

In the previous case, a bear that had been taking food from camp sites and a house in the West Yellowstone area was captured and transferred to a local zoo.

Relocating bears is often not an option, according to wildlife officials. That’s because of competing land uses and because other grizzlies already occupy much of the best wildlife habitat following successful restoration efforts over the past few decades.

Postal Service Loses $2.2B In 3 months As Virus Woes Persist