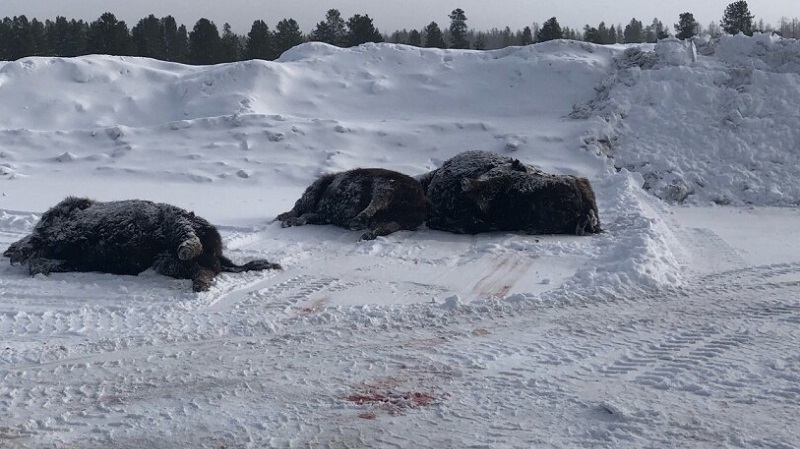 West Yellowstone, Montana – On Wednesday night, a number of bison were killed on Highway 191.

Mike Gavagan, the chief of West Yellowstone Police, reported on Thursday morning that 13 bison were killed close to milepost 4 on the roadway.

One semi-truck and two additional automobiles, according to the chief, were involved. No one was hurt while inside the cars.

Due to their severe injuries, some bison had to be killed.

Gavagan reported that the Wednesday collision occurred around 6:30 p.m. Due to their black coats and lack of reflecting eyes, bison are difficult to notice in the dark.

Gavagan claims that they are constantly working to get the remaining bison off the road, and on Wednesday night they were successful in doing so.

He added that it wasn’t necessarily speeding but that there was some worry about possibly driving too quickly for the circumstances. The curve to go down the hill to the transfer station entrance is on a rough portion of the road.

The bison may find it simpler to cross at one spot of that road that is plowed.

The chief claimed that although they occasionally manage to harvest bison, salvage tags are not available due to brucellosis worries. They have previously requested some from the Grizzly and Wolf Discovery Center and stolen some.

Following the event last night, a deputy from the Gallatin County Sheriff’s Office, a police officer from West Yellowstone Police Department, a park ranger, and the fire chief all assisted with traffic control and the removal of bison from the road.

Southwest traveler in Bozeman tells about their flight cancellation “horror”