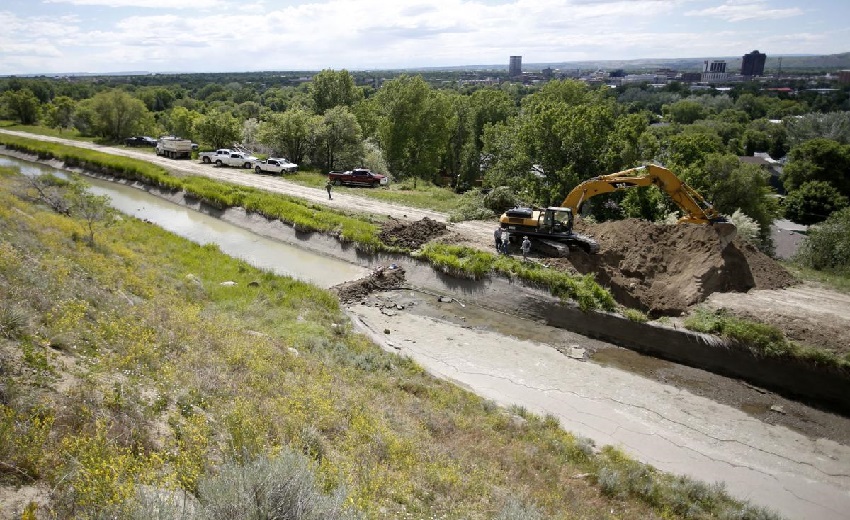 Billings, Montana – The largest of seven irrigation ditches that run through Billings, the Billings Bench Water Association canal, was practically empty Tuesday while repairs to a liner were done and the city investigated cracks discovered in the hill below the ditch.

The canal connects Laurel and Shepherd. It is used by nearly 1,200 people who use it for irrigation in their farms, gardens, and yards.

“This was not a lack of maintenance on our part; vandalism of the liner caused this shut off. Your patience is greatly appreciated,” according to a facebook post on Billings Bench water’s page.

According to Gary Davis, president of the Billings Water Association’s board of directors, technicians are fixing a liner that have been damaged with multiple holes, but this is only one of the issues.

After BBWA officials detected cracks and possible earth movement in the hill below the ditch between North 14th Street and North 15th Street, where the ditch flows under a tunnel, the city of Billings engaged a geotechnical company to investigate.

This is in the same neighborhood where some homes experienced foundation damage due to leaked water two years ago.

The city is attempting to determine the reason, what to do about it, and a strategy to reduce the chance of failure, city administrator Chris Kukulski says.

The city will release a statement on the situation on Tuesday.

Meanwhile, Billings Bench Water Association officials are optimistic that the water will be flowing again by Wednesday or Thursday.

Park Place roadway shut down due to road work