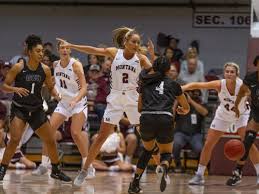 After losing to Gonzaga over the weekend, the Montana Lady Griz continued their Washington state road trip Tuesday afternoon with a 61-55 victory over the Seattle Redhawks at the Redhawk Center.

Freshman Kyndall Keller had the best game of her career thus far with 17 points on Tuesday.  The Havre native and former Montana Gatorade Player of the Year scored 14 of her 17 points in the second half as she was 4-for-5 shooting from beyond the arc.

Montana led at halftime 31-20 thanks to strong three-point shooting from forward Hannah Thurmon. All nine of her first half points came from downtown. Abby Anderson supplemented that with six points of her own, finishing the afternoon with 12.

However, the Redhawks clawed back in the second half – trailing by as little as three in the third quarter. Keller took over from there though as she scored 14 of Montana’s 30 second half points.

Now sitting at 2-2, the Lady Griz will wrap up their pre-Christmas schedule on on Monday, Dec. 21 when they welcome the Utah Valley Wolverines in Dahlberg Arena at 2 p.m.