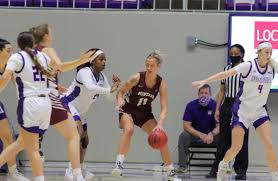 The Montana women’s basketball team extended its winning streak to a season-high three games on Saturday at Weber State, but not before having to overcome some unexpectedly tense moments.

After building a 39-22 halftime lead, the Lady Griz went cold in the second half and fell behind by as many as three in the fourth quarter.

Montana trailed 57-56 entering the final two minutes, but a game-winning basket by Abby Anderson with 1:48 to go and some defensive stops — one an Anderson blocked shot — allowed the Lady Griz to finish the two-game road sweep, 58-57.

“When we lost the lead, we had every reason to sulk, and we didn’t,” UM coach Mike Petrino said of Saturday. “We rallied together and got the job done. I’m proud of getting two road wins.”

With the game tied 15-15 after the first quarter, Montana exploded in the second, outscoring Weber State 24-7 to send the Lady Griz to the locker room with a comfortable 17-point lead.

It looked like it was going to be another blowout loss for the Wildcats, who entered the game getting outscored this season by more than 19 points per outing.

But Montana couldn’t maintain the momentum through the break.

The Lady Griz had three turnovers less than three minutes into the second half, and the Wildcats hit their first four shots of the third quarter. And all of a sudden it was a game again.

Montana went 2 for 12 in the third quarter and 6 for 28 in the second half after shooting 43% to open the game.

Weber State outscored Montana 23-10 in the third period to pull within four.

“For all the good things we did in the first half, they kind of got erased in the third quarter,” Petrino said. “We got stagnant on offense and defense. When you miss shots on offense, you stand more on defense. We let them get momentum.”

Weber State had hit only 46 3-pointers all season entering Saturday’s game. Only 10 teams in the entire nation average fewer makes per game.

The Wildcats hit three in the third quarter and opened the fourth with another. The Wildcats were then within one, 49-48.

“Credit to them. They had some kids who stepped up and made plays,” Petrino said. “I don’t think our effort was consistent on defense.”

Montana misfired on its first four shots of the fourth quarter, making them 2 for 16 in the second half to that point.

The Lady Griz gave up the lead a minute into the final period and fell behind by three, 52-49, on a pair of Weber State free throws. It was only the second time this season the Wildcats have held a lead in the fourth quarter.

Enter Kyndall Keller. The UM freshman asked for the ball on the left wing and hit a 3-pointer with 7:18 to go that tied the score at 52-52.

Keller finished with 10 points off the bench, her best scoring game since Jan. 1.

“Kyndall was a huge spark for us,” Petrino said. “She comes off the bench and gives us so much energy. Her efforts create opportunities for our team, and that’s huge for us.”

With a chance to pick up its first win of the season, Weber State went 3 for 16 in the fourth quarter. But Montana went 4 for 16, and that kept it a one-possession game the rest of the way.

After Keller’s basket, neither team scored for the next three and a half minutes, until a Weber State free throw gave the Wildcats a one-point lead.

Sophia Stiles answered on Montana’s next possession, a turnaround from 10 feet out to put the Lady Griz up one, 54-53. She would be Montana’s most consistent performer on Saturday, picking up her second career double-double with 13 points and 12 rebounds. She also added four assists while playing a team-high 33 minutes.

When Weber State hit a 3-pointer 13 seconds later, its season-high seventh of the game, to go up 56-54 with 3:07 left, it felt like it might be the death blow with the way things were going.

Enter Anderson. She was 2 for 8 when she got the ball on the left block with 2:37 remaining and scored to tie it at 56-56. After the Wildcats made one of two free throws, Montana again went to Anderson, this time on the right block. She scored again with 1:48 left, putting her team up 58-57.

She wasn’t done. Aloma Solovi appeared to have an open 12 footer with 75 seconds left, but there was Anderson to swat it away, her fourth block of the day, her ninth of the road trip. Weber State got a pair of good looks in the final minute but missed on both.