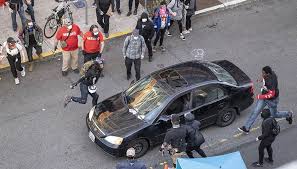 Police say they’ve arrested a man who shot a man after he drove his car into a crowd of peaceful protesters amid ongoing unrest in Seattle.

The Seattle Police Department confirmed in a tweet Sunday night that a man had been arrested after a man “drove a vehicle into a crowd.” Police recovered a gun at the scene.

The victim was transported to a local hospital. The Seattle Times reports that the victim is stable.

According to the Times, the shooting occurred when the suspect was still in his car. Protesters reportedly ran alongside the vehicle, trying to stop it as the suspect drove it into the crowd.

Video of the incident shared on Twitter shows protesters quickly scatter as the man emerges from his car, brandishing a handgun.

After the suspect disappeared into the crowd, protesters tended to the victim. They reportedly applied a tourniquet to the man’s arm before paramedics arrived.

Protests have been taking place for over a week following the death of George Floyd — a man who died in police custody in Minneapolis. Video from the incident shows an officer kneeling on Floyd’s neck for more than eight minutes. That officer now faces second-degree murder charges, and three other officers have also been charged in connection with Floyd’s death.

While protests throughout the country have been largely peaceful in recent days, police continue to clash with demonstrators in Seattle. On Saturday, police used flash-bang grenades and chemical dispersants to remove protesters from the streets, prompting criticism from the Seattle City Council.