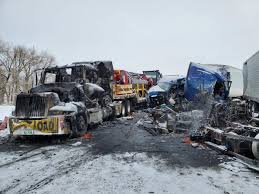 (UPDATE, 1:23 pm) Officers at the scene said about 30 to 40 vehicles are involved. The interstate is likely to be closed for a few hours while Montana Highway Patrol troopers investigate the crash.

There have been no fatalities reported, but there are people with serious and minor injuries.

(1st REPORT) Emergency crews are at the scene of a massive pile-up of vehicles along I-90 in Billings.

The Montana Highway Patrol says that westbound I-90 is closed starting at the I-94 split near Johnson Lane.

At this point, there is no word on whether there have been any serious injuries, nor what triggered the pile-up.

We will update you when we get more details.
Related Topics:
Up Next