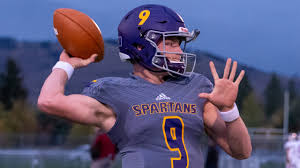 MISSOULA — Missoula Sentinel quarterback Camden Sirmon isn’t someone who shies away from challenges, and he’s prepared to take on another.

Sirmon decommitted from the Montana Grizzlies on Thursday to try to compete in the Pac-12 with the Washington Huskies. It’s a return to his home state after he took a gamble by moving from Wenatchee, Washington, to Missoula for his senior season of high school when the outlook for sports in Washington was bleak amid the pandemic.

Sirmon confirmed the move with 406mtsports.com and will be heading to UW as a walk-on quarterback. He had committed to the Montana Grizzlies but never officially signed a binding agreement because he was a walk-on in UM’s 2021 recruiting class.

“First off I would like to thank the coaching staff at the University of Montana for giving me an opportunity to play for such a great program,” Sirmon wrote in a note attached to his tweet announcing his decision. “After about a month of trying to figure out where I wanted to spend my next 5 years… I have come to (the) conclusion that the University of Washington will be the most advantageous opportunity for me to play at the highest level.

“I would like to thank everyone who has gotten me to this point! With that being said… I have de-committed from the University of Montana and will be looking forward to compete at the University of Washington. Go Dawgs!”

The 6-foot, 195-pound Sirmon was named the Class AA offensive MVP this past fall, and he became the No. 9 prospect in the state and a 2-star quarterback, as graded by 247Sports. He completed 65.3% of his passes for 949 yards and 11 touchdowns with just two interceptions in 10 games. He rushed for 847 yards and 11 touchdowns.

Sirmon was offered by Montana the morning after he helped lead Sentinel to its first state championship in 48 years as part of a two-QB system. He had no D-I offers when he moved from Washington and committed on the spot as an athlete for UM, where his uncle David Sirmon played on UM’s 1995 national title team and brother Cy Sirmon played from 2015-19.

Sirmon now heads to Washington, where his cousin Jackson Sirmon is a junior linebacker and his uncle David Sirmon is a professor. Another cousin, Jacob Sirmon, spent three years as a backup quarterback for the Huskies before he transferred to Central Michigan after the 2020 season to play for Missoula native and Sentinel grad Jim McElwain.