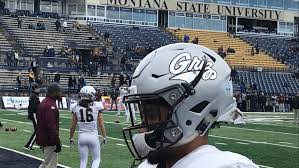 MISSOULA — After a breakout 2019 campaign, Samori Toure is breaking away from the Montana Grizzlies.

Toure, an All-American and record-breaking receiver from Portland, entered the NCAA transfer portal on Thursday. He didn’t respond to a request for comment about why he chose to enter the portal.

Toure is the first top-tier Grizzly to enter the transfer portal since the Big Sky Conference decided to move the 2020 football season to the spring and the NCAA granted every player an extra year of eligibility. The latter means Toure’s final year to play in college before testing his NFL prospects will now be 2021 instead of 2020.

“I would like to start off by thanking God because I wouldn’t be the man or the player I am today without Him and His blessings,” Toure wrote on Twitter.

“I would also like to thank Coach Hauck, Coach Pease, and the rest of the coaching staff here at the University of Montana for helping me grow both as a player and as a man.

“Also, I want to extend my greatest appreciation to GRIZ NATION aka the best fan base in the FCS. The amount of love and support I have received since I stepped on this campus is unimaginable.

“However, after careful consideration and talking it over with my loved ones, I have decided to enter my name in the NCAA transfer portal as a graduate transfer with the intention of using my final year of eligibility in the ’21 season.”

A UM spokesperson said that coach Bobby Hauck “doesn’t have a comment at this time” and that Toure is graduating this semester. As a grad transfer, Toure would be immediately eligible to play at the school to which he transfers.

Toure landed on four All-American teams following the 2019 season and was a preseason first-team All-American selection on three teams heading into 2020. The redshirt senior was the lone Big Sky Conference player named to the 250-player Reese’s Senior Bowl watch list, and he was a semifinalist for the Campbell Trophy, aka the Academic Heisman.

Toure had 303 receiving yards in Montana’s playoff win over Southeastern Louisiana, breaking the single-game school record and the FCS playoff record, the latter held by former Marshall standout Randy Moss. It was Montana’s first playoff win since 2015 as the Griz finished the season 10-4.

Several Grizzlies tweeted their support of Toure after he announced he was entering the transfer portal.

Cornerback Trajon Cotton wrote: “My dawg made the best decision for your future.”

Former receiver Keenan Curran tweeted: “Wow! Proud of you bro. You’ll live on forever in the 406!!!”

Players who enter the transfer portal are still allowed to return to their current school if they choose to and are welcomed back by the coaching staff. Entering the portal allows them to contact other teams while still being enrolled at their current school.

Hauck previously said that Griz players who enter the portal forfeit their scholarship when it expires at the end of the school year and that those year-to-year scholarships won’t be saved for them if they decide to return.

“You’re either in or you’re out,” Hauck said in March after the first year of the portal being implemented. “I would believe that probably 99% of football coaches agree with that philosophy.”