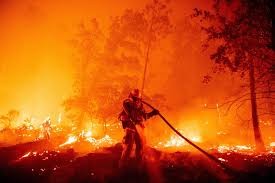 More than a dozen Montana firefighters have returned home after helping fight the fires that scorched more than two million acres in California.

LIBBY HOPPER, A FIREFIGHTER AND PARAMEDIC, HAS BEEN DOING WHAT SHE LOVES MOST FOR THE LAST DECADE — HELPING THOSE IN NEED

very fulfilling job. have the potential to do a lot of good on people’s worst day

just a huge fire, it would take an hour and half to drive from one end to the other, on highways.

HOPPER, ALONG WITH 18 MONTANA FIREFIGHTERS AND THEIR ENGINES FROM MISSOULA RURAL, LIVINGSTON, CENTRAL VALLEY, BIG SKY AND COLUMBUS… WERE ON TWO WEEK ASSIGNMENTS IN THE GOLDEN STATE.

we were in an area that typically doesnt see that type of fire behavior or lightning activity that they got. adn so it was an area were the resources were spread super super thin….

AND BEING ABLE TO HELP CALIFORNIANS DURING THIS CHAOTIC TIME IS SOMETHING SHE WON’T HESITATE TO DO MOVING FORWARD.

it was wonderful to be able to go down and help not only our brothers and sisters in the fire service, but also their neighbors and communities and give back to them when they’ve come up here and helped us during bad years.

No charges filed in fatal shooting on Montana trailhead