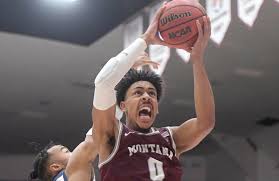 MISSOULA — It’s time to travel once again for the Montana men’s basketball team, as they head to Sacramento State for two games this weekend.

The Grizzlies are coming off a five-game homestand and have not traveled for a game out of Missoula since a Dec. 22 contest against Arizona. The Grizzlies have won just a single game out of the Garden City this year — an upset over Pac-12 squad Washington — but would very much like the chance to add a couple victories to the win column.

“I feel like it gives us some time to chill, talk about the game, talk about our last game,” sophomore forward DJ Carter-Hollinger said following Montana’s loss on Saturday to NAU. “It’s just time to talk about things we can work on to get better.”

After beating Northern Arizona soundly in the first matchup of the two-game homestand, the Grizzlies blew a 17-point first half lead to the Lumberjacks in the Saturday contest.

Currently sitting at 9th in the Big Sky Conference standings, there is work to be done if the team is to live up to its own preseason expectations. At this point in Montana’s tenure under Travis DeCuire, they expect to contend for a league title every year.

The turnover in the offseason — and two players leaving after the 2020-21 season had started — shook things up a bit and UM has only 12 players on its roster at this point. But they are starting to become more cohesive and have played some very good stretches of basketball, especially defensively.

This is a historically good UM defense and its 61.7 points per game allowed is the 23rd best mark in the country. Opponents are making barely over 40% of their field goals against the Grizzlies, the 40.7% mark ranks 77th.

Even better for UM is its 3-point defense — opposing teams have made 29.8% of those shots, the 54th best percentage in the country.

Sacramento State could provide a big challenge on both ends of the court. The Hornets are averaging 72.4 points per game and allowing just 58.3, though the they have only played five Division I teams, which were two games apiece against Idaho State and Idaho as well as a non-conference guaranteed game versus St. Mary’s.

Ethan Esposito had led the Hornets with 16.9 points and 7.6 rebounds per game. Christian Tyrell (14.6 points per game) is second and Bryce Fowler and William Fitzpatrick are also averaging double figures.

Montana will need to manufacture more offense, which has mostly come from long possessions this year. The Grizzlies would like to get out in transition, but that has not been a priority this year.

Kyle Owens leads the Grizzlies with 11.4 points per game and Michael Steadman isn’t far behind with 11.0. Much of the Grizzly offense has come in the post, with its outside shooting not particularly a big factor.

Montana’s 4.8 3-pointers made per game ranks 330th in the country. There are 347 teams that play in Division I of the NCAA. Montana is hitting its shots at a 35.6% clip, but it just takes a very small amount of them.

“We need to score in all aspects of the game,” DeCuire said.