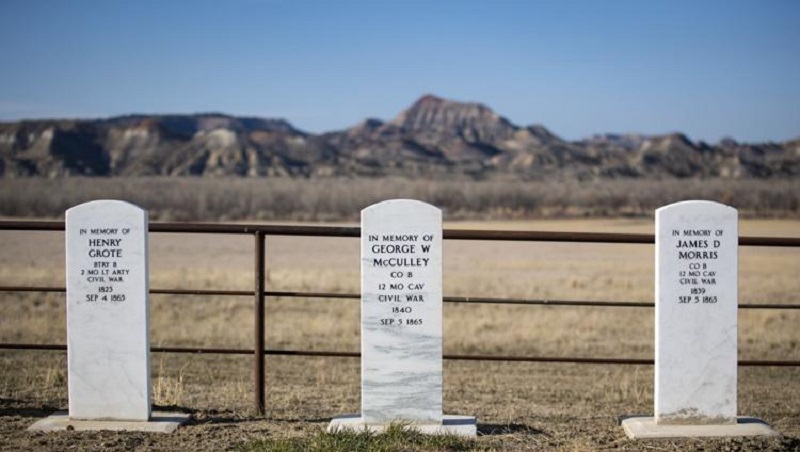 Butte, Montana – It’s chilly and windy in Virginia City’s old cemetery. The rain and wind have nearly blown away numerous headstones of Civil War troops there, but several local veterans have worked to protect these warriors’ final resting places.

“I grew up for a short time in Pennsylvania five miles east of Gettysburg, so that’s where my interest in the Civil War started many years ago. And to see these Civil War stones, it just didn’t sit right with me,” said Bob Reimard.

“They sunk into the ground a little bit, the writing is difficult to see,” said Reimard.

The identities of 18 Civil War warriors as well as a few Spanish/American War veterans buried in Virginia City were found after he and his wife investigated county records and history books. The veteran’s full name was inscribed on a new brick that was positioned next to the old headstones in a cement base.

Additionally, he erected a memorial wall listing the names of twenty Civil War troops interred at the Sheridan Cemetery in unmarked graves. The names on the original memorial were almost completely worn away due to its age.

“These are veterans, 150 years ago, but still these are our veterans. We felt they deserved the respect that we would give a veteran today,” he said.

One of the grave markers had a first name without an initial and the last name “Todd” was scarcely legible due to extreme wear. Bob had to conduct some investigation in order to determine that this was veteran Lockwood Todd.

“Headstones are transitory and all like that, but we’ve saved names and now they’re out there. It’s not going to last forever, but, you know, they’re staying. It’s not going to vanish on our watch,” said Sheridan American Legion Post Commander Cliff Morgan.