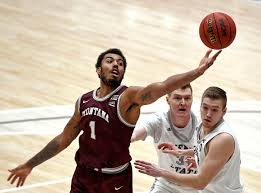 MISSOULA — Montana men’s basketball player Cam Satterwhite has been cleared by the NCAA and is officially eligible to play this season.

When Satterwhite announced his commitment to the Grizzlies in the spring, he was under the impression he would be immediately eligible. A transfer from fellow Big Sky school Northern Arizona, his graduation needed to go through before he could become a graduate student at Montana.

“These waivers are never clear cut, what’s on paper isn’t always how it works out,” UM head coach Travis DeCuire told the Missoulian on Wednesday evening. “Everyone’s got to be on the same page and the decision has to be made, but the kid is never in control of the situation.

“That’s one of the toughest things … they leave for a lot of different reasons and there’s a lot of moving parts in college athletics. It’s never clear as to how a kid’s eligibility will be decided.”

In late July, it seemed as if Satterwhite might not have the chance to suit up for the Grizzlies. He was on campus, but hadn’t received the go-ahead from NAU yet.

“He’s a phenomenal young man and continued to stay positive,” DeCuire said. “He worked and did all of the things that were asked of him while waiting out the process.”

Two years ago the NCAA even went so far as to pass a rule that student-athletes do not have to receive permission from their school to transfer. However the process can still drag out in some situations and it took nearly six months for the process to complete for Satterwhite.

In any case, on Sept. 4, Satterwhite tweeted out a photo of his diploma. Five days later, on Wednesday, he tweeted a message to his followers. He is now a UM graduate student in the Environmental Journalism program.

“Great news!! Excited to be cleared by the NCAA and move forward with my masters and basketball at Montana!! I want to put everything else behind me and wish NAU well. Thank you to everyone that helped with the process. Go Griz!,” he tweeted.

Satterwhite played in 29 games for NAU last year, starting 18. He averaged 9.0 points per game on 42.7% shooting from the field and 38% from behind the 3-point arc. He also grabbed 2.4 rebounds and dished out 1.7 assists per game.

He is expected to compete for time this year, perhaps even as a starter.

“One of the things that we lost with that 2019 class was length and athleticism at the guard position,” DeCuire said. “We brought in some different players and different skill sets, but we were missing that athletic length that could guard multiple positions.

“We feel that Cameron brings that to the table.”