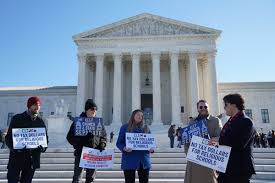 The U.S. Supreme Court was split as it declared Tuesday private religious schools can receive money from a Montana tax credit program, and people in the state were no less divided on hearing the news.

The country’s high court said a rule written by the state Department of Revenue to implement a 2015 law was unconstitutional because it prohibited students from using a scholarship funded through a tax credit program for attending religious private schools. The department had argued if the money went to religious programs, it would violate a no-aid provision in the state Constitution that stops state money from going to religious organizations.

Chief Justice John Roberts, who wrote the 5-4 majority opinion, said the state was not required to “subsidize private education” but that if it did, “it cannot disqualify some private schools solely because they are religious.”

Two of the Montana mothers who filed the original lawsuit in 2016 said Tuesday they’re thankful for the court’s order.

“Today is truly an historic moment and a big victory for our family and for so many other families,” said Kendra Espinoza, whose name led the Espinoza v. Department of Revenue case first filed in Kalispell District Court.

Jeri Anderson, another Kalispell mom who was part of the lawsuit, said she was thrilled with the decision.

“Having access to the scholarship is going to make a tremendous difference toward Emma’s future education,” Anderson said of her daughter.

While the lawsuit was pending, people were still able to claim the $150 tax credit and scholarships were awarded.

“I’m very glad the U.S. Supreme Court ruled to overturn the State of Montana’s discriminatory action and support three Montana mothers who were trying to do what’s best for their children’s education,” Daines said in a press release. “Today is a major victory across Montana and the country for religious liberty. Religious discrimination has no place in our country.”

“Today’s ruling is a step in the right direction to ensure our kids have access to the best possible education that meets their unique, individual needs. While this is a promising step toward that goal, another step we must take is to get more resources to our classrooms and teachers,” said Gianforte, who helped found a private religious school in Bozeman and has funded scholarships for private education.

Republican Attorney General Tim Fox wrote a letter to the state Department of Revenue in 2015 raising concerns about the way the department crafted the rules, saying they would not be defensible in federal court. On Tuesday he issued a statement saying the Supreme Court referenced his letter in their opinion.

“After thorough analysis of the proposed rule, I urged the Bullock Administration not to adopt it for the very reason the U.S. Supreme Court issued its ruling,” Fox said in the statement.

While the Institute for Justice, which represented Espinoza and Anderson, said Tuesday the court’s opinion means “the major state constitutional weapon that the opponents of (school) choice have has now been removed,” the governor’s chief legal counsel who defended the department’s rule in court argued against extrapolating too much about what the decision means for Montana.

“I’m disappointed in the court’s decision, but I respect it,” said Raph Graybill. “It would be a mistake to read this ruling more broadly than it is. It’s not accurate to say this ruling requires Montana to finance private religious schools. It said that if you finance any private schools, you have to treat religious schools and non-religious schools equally. What future government decision-makers do with that will come in time.”

Democratic Gov. Steve Bullock said he was “disappointed” in the decision and that he “will continue the fight for public education in Montana.”

But the head of the Montana Family Foundation, which has been leading the charge for school choice in Montana for the last decade, said Tuesday he views the decision as a huge victory.

The foundation helped draft the original bill and the one that eventually passed in 2015. Its president, Jeff Laszloffy, said in a press release following Tuesday’s decision that “many more school choice bills will be introduced in the next session of the Montana Legislature.”

“We believe that with this decision from the U.S. Supreme Court, a lot of the arguments against school choice are now taken off the table and we believe the sky’s the limit,” Laszloffy said.

The head of the state’s largest union, which represents school employees, said public education will be harmed.

Tuesday’s decision comes in the midst of an election year. Daines is running against Bullock for U.S. Senate, while Gianforte is squaring off against Democratic Lt. Gov. Mike Cooney in the governor race.

The Montana Democratic Party criticized Republicans on the ballot this year, saying their support of the decision hurts public education in Montana.

“ … Now more than ever, Montanans must elect leaders to defend our public school system from these outrageous attacks,” said the party’s deputy communications director Matt Fidel.

In his capacity as a Democratic candidate for attorney general, Graybill said if elected he would have staked a different course than Fox.

“Elections matter. As attorney general, I will always fight to defend our state Constitution and its guarantee to quality public education,” Graybill said.

His opponent, former Republican Speaker of the state House Austin Knudsen, who voted for the tax credits bill in 2015, in a Facebook post criticized the way the Department of Revenue wrote the rules.

“These brave parents took their case all the way to the U.S. Supreme Court, and this morning won a huge victory for all Montana parents,” Knudsen wrote.

“While Gianforte cheers this devastating ruling, we’re going to double down on our commitment to protecting Montana’s public schools, students and teachers from these attacks,” Cooney said.

In her official capacity, state Superintendent of Public Instruction Elsie Arntzen said she voted for the bill in 2015 because she viewed it as “neutral,” saying the money could got to any private school in Montana, not just religious ones. She said Tuesday that in her role as the head of the state Office of Public Instruction, she would work if re-elected to make sure the state Legislature upholds its duty to fund public education in the upcoming session.

“Montanans should be alarmed by the chipping away of our state Constitution, and the blatant attacks pro-privatization advocates are launching on public education,” Romano said.