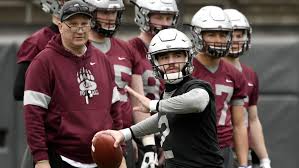 MISSOULA — Just because there aren’t any college football games in Montana this fall doesn’t mean football has completely disappeared from the University of Montana’s campus.

The players have been able to get in up to 12 hours of activities per week over the past three weeks with coaches, spending time in the weight room, in the film room, in meetings and on the practice field. They also have school to attend, while coaches continue to work on putting together their recruiting class among a myriad of other duties.

“For a bunch of guys with nothing to do, we’re pretty busy,” Montana coach Bobby Hauck told the Missoulian on Friday as a potential fall practice schedule and spring season begins to take the earliest of shapes, with the Division I Council scheduled to vote on several measures Wednesday. “I think that’s good. I think there’s a lot of structure to the week.”

It’s been just over one month since the Big Sky Conference Presidents Council voted to move the conference season to the spring semester Aug. 7, the day Montana would’ve began fall camp for what had been a highly anticipated season before the coronavirus pandemic hit in March. The Presidents Council later decided to cancel all non-conference games this semester.

Teams like Montana are allotted 12 hours per week for football activities from Aug. 24 through Oct. 4. Up to five of those hours can include non-contact work on the football field; the other seven hours can be divided between meetings, film review, and strength and conditioning.

For the Griz, they’re in the weight room four days per week and getting in individual skills workouts with scheme installation two days per week.  Players are required to have the weekends off from football.

The types of work the Griz have been getting in is similar to what they’re allowed to do outside of the spring camp period in the spring semester. Minor additions now are that they can use a football and wear helmets on the field during these current activities.

“Our guys have been motivated. It’s been great,” Hauck said. “We’ve had great work all summer, including since school started, we’ve had great work with our guys. If you love football, you love the preparation or whatever is next for the next game, whenever that is. In terms of motivation, if you aren’t motivated, you can’t be here.”

The Griz began those “countable athletics activities” when the Division I Council approved that for teams not playing their football season until the spring. The approval is the first attempt to help the 100-plus FCS teams not playing this fall — 15 teams are playing at least one game — not fall behind others who are getting in practices for their games.

The next step would be allowing them to get in full practices as opposed to just the activities that teams are limited to by rule.

“It’s sort of like teams that go to bowl games have a distinct advantage where they get 15-20 extra practices for everybody,” Hauck said. “The teams that don’t qualify for bowl games don’t get those.

“I think the way (practicing) could be structured is pretty broad. I don’t think there’s any one way to do it, only one way that would work. But something spring ball-like would be good, and I think we’ll probably get to that.”

The Griz were able to begin the activities because the COVID-19 testing rules mandated by the NCAA for teams playing games aren’t required for these activities, Montana athletic director Kent Haslam said.

Instead, UM is able to follow the Missoula City-County Health Department’s recommended health screenings, which have been in place since the football team resumed voluntary workouts June 1. They do testing, tracing and isolation when someone shows symptoms.

The mandated testing required teams playing to do weekly testing of players, coaches, trainers and others in the athletic department who are around the team during preseason practices, regular-season games and postseason games, potentially 20 weeks. When discussions about playing this fall were taking place, testing would’ve cost UM athletics an estimated $10,000 per week for football and about $15,000 per week for all fall sports at a minimum, Haslam said.

In regards to the Big Sky canceling fall football, commissioner Tom Wistrcill had said the NCAA testing protocols were “certainly a factor that played into it, maybe a tipping point” and that “it was virtually impossible for us to pull off” because of testing costs and the logistics of testing.

Haslam noted that testing issues weren’t just costly but the availability of tests, getting timely results and mass asymptomatic testing of football players taking away from the limited testing supplies available in the state when talks about the season were ongoing in the summer.

The Montana University System has since received $20 million from Gov. Steve Bullock to help with on-campus testing. Griz football players, like any student, can participate in free testing with same-day results at UM’s Curry Health Center if they have symptoms, while a plan for surveillance testing of asymptomatic people in high-risk populations is the second tier of who should be tested.

Aside from testing, there were concerns about the limited amount of people allowed on each sideline in counties where they’d play. Missoula is allowing 60 for high school football, up from 25 that had been in place most of the summer in Phase 2, the current phase. Then there were questions about whether it was wise to take players out of state for games and bring them back into the campus community, where they could possibly unknowingly spread the virus.

“Testing was certainly part of it, and I think that was the final factor, but there were a lot of other swirling factors, too,” Haslam said.

Even while in phase two still, teams could potentially begin on-field practices starting Sept. 21 and running through Oct. 25 if a proposal from the Football Oversight Committee gets approved by the Division I Council on Wednesday. That practice time would give Hauck a better gauge of if the work the team has been putting in the past three weeks is making a difference.

“You can’t tell if someone’s improving as an individual or as a group if you aren’t doing things that are actual football,” he said.

Montana isn’t pursuing playing any football games this fall, even an in-state game against Montana State, Haslam said. Former Griz and Loyola punter Eric Williams started an online petition to Bullock to “bring back the brawl,” and it’s gotten 68 signatures since Wednesday.

However, Big Sky schools aren’t permitted to play football games this fall — Hauck said he’d want UM to play if allowed. That was decided by a Presidents Council vote last month and confirmed by a Big Sky spokesperson Friday as still being the case.

“I don’t foresee that changing,” Haslam said of playing this fall. “Now, if tomorrow a vaccine rolls out, all bets are off. But it’s not going to happen. We are not planning any fall competitions at all with outside competition. How intrasquad scrimmages … play out would be different.”

Before a spring schedule can be put together, a playoff format had to be decided upon so that teams could work backwards to create a start date for the season.

The Football Championship Committee, of which Haslam is a member, proposed a tournament to run between April 18-May 15. The proposal called for 16 teams, down from the usual 24, with 10 automatic qualifiers and six at-large bids.

Another recommendation is that teams can play in both the fall and spring but are limited to the usual 11 regular-season games and that they could be eligible for the playoffs with their fall resume factored into the selection.

The Football Oversight Committee provided that same recommendations to the Division I Council.

“That just seemed like the most reasonable and best approach to have a meaningful championship in the spring,” Haslam said.

Wistrcill and Haslam previously noted the Big Sky’s plan is to play eight conference games over nine weeks in the spring. A Big Sky spokesperson said the conference “is exploring a variety of scheduling options” during its twice-weekly meetings with conference ADs.

“The NCAA is expected in the next week or two to announce details about this spring’s FCS championship regarding the competition dates and bracket size, as those decisions obviously will help to guide our process,” the spokesperson said.

If the eight games in nine weeks holds up, and given that the proposed final Saturday of the regular season would be April 17, that means the projected start date for the Big Sky would be Feb. 20, which is the regular-season competition window proposed by the Football Oversight Committee. The group also recommended a preseason camp from Jan. 22 through Feb. 19.

“For the spring, there will be the traditional camp like has been done in August and then regular practices for in-season,” said Jean Gee, who’s on both the Football Oversight Committee and Division I Council. She is UM’s Senior Woman Administrator and senior associate AD for student affairs and compliance. “It is our goal to get ‘back to normal’ for summer activities 2021 and fall 2021 preseason.”

Having a plan is one thing but pulling off a spring season is something else.

The biggest challenge to playing in the spring is the status of the virus, Haslam and Wistrcill both noted, because that will come with county regulations for masks, sideline sizes and crowd sizes, the latter determining if it’d be financially feasible for schools to play. A vaccine that works provides the best chances of playing, while cheaper testing could make it more affordable.

Several saliva-based tests have come out, one of which is SalivaDirect, a cheaper, faster and easier testing method from Yale that got FDA emergency use authorization. The cost is projected to be $4 per test, down from about $75-100 per test for about 100-150 people for football and about 150-200 for all fall sports at UM, Haslam estimated.

If there’s a vaccine or cheaper testing, the next challenges are related to practicing and playing in the cold weather in Montana in January and February and then the comfort level of players to play or opt out, Haslam said.

The NCAA granting all fall sport athletes an extra year of eligibility means seniors who want to play their final year won’t be forced to do so in the spring. With that, the NCAA moving the playoffs to the spring to provide a meaningful spring experience, and committees proposing dates for playoffs and practices, there’s are more glimpses of light at the end of the tunnel.

“Each time we kind of jumped these hurdles of getting a championship, getting a calendar, getting eligibility, that spring season becomes more and more a reality,” Haslam said. “I’m far more confident that we’ll have a spring season today than even about a month ago when we actually canceled.”

As for how confident, neither Haslam nor Hauck wanted to put a percentage on their confidence level when asked. And in terms of the feasibility of a quick turnaround from the playoffs ending in mid-May to starting fall camp in August, schools have to weigh whether they’re sacrificing or compromising the fall of 2021 to play in the spring of 2021.

“I’m confident that we’ll play in the spring because it seems to be we’re understanding the virus better and we’re going to have other schools that have competed and played, we’re starting to see that happening now, and we’re going to have an understanding of how we can compete and still stay safe and healthy,” Haslam said. “But the status of the virus is the No. 1 factor when it comes to spring.”

For the Griz, they’ll continue to prepare as much as allowed — “We’re like the military: we believe in training,” Hauck said Aug. 7 — even though they don’t know who’s their next opponent and what’s their next game day.

“Football is not over,” he said that day. “Football’s delayed.”