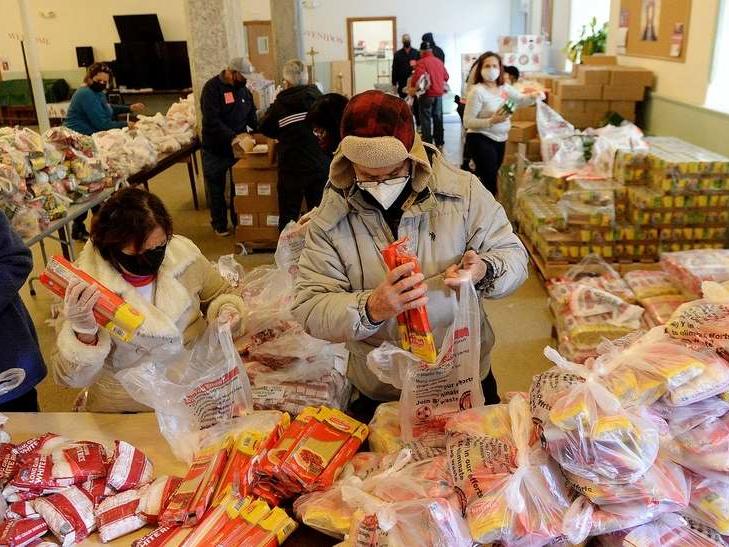 Montana State University’s food pantry, Bounty of the Bridgers, has seen an increased need since the pandemic hit but has so far met that need through a number of local donations and federal aid.

The student-led food pantry, affiliated with Gallatin Valley Food Bank, serves students, faculty and staff of the university. Before the COVID-19 pandemic, the pantry was helping 55 to 65 families per month on a regular basis. When the virus hit, the number went up to 75 families per month.

“When the pandemic hit, we saw an increase in people who used the pantry,” said Marci Torres, director of the university’s office of health advancement. “…As time went on, it became more of a problem.”

With the university a week into the spring semester, Torres said they are starting to see the numbers increase again but it was still too early to have a good representation.

She said the service industry was particularly hard hit when public health issues forced a lot of closures, which hurt a lot of people financially. In addition to those out of work or with reduced hours, there is another level of food insecurity from people who had to quarantine for extended periods of time and can’t access work or a grocery store.

“Those people were becoming food insecure,” she said.

To help those individuals, the pantry allowed friends to pick up food and drop it off at the doorstep for the people unable to leave their home.

Due to the pandemic, the food pantry has also changed how it operates. Although it’s still open during its regular hours, people are asked to make an appointment ahead of time and workers package the food to be picked up at the scheduled time.

“Now since they do have to make that appointment and do have to sign up ahead of time, it probably does keep it from being bigger than it already is,” she said

Bounty of the Bridgers is also in its second year of a food scholarship program, which offers dining hall passes to students in need. In the fall semester, they received 208 applications. Five days into the spring semester application process, it had already received 159 applications. The last day to apply is Jan. 25.

She said the increased need is not something specific to Bozeman, but food pantries across the country are seeing more and more people experiencing food insecurity.

The number of people turning to Bounty of the Bridgers for help has remained relatively consistent at its high volume since the start of the pandemic, Torres said. With the rollout of vaccines, she said there is hope the level of need will return to normal soon.

She said some consistent donors, like the Northwest Farm Credit Services, increased their financial donations to help meet the increased number of food bank users.

Last year, Bounty of the Bridgers also applied for federal CARES Act funding and received $12,000 to buy food, hygiene items and gift cards for Town and Country during the holiday season. Torres said the grant was helpful to fund the increased need.

It received a $50,000 donation from the Mericos Foundation to purchase a refrigerated truck. The food bank also does “food rescue” every Saturday from three local grocery stores to collect food the stores can no longer sell but is still good. Torres said the refrigerated truck would help them collect the food. It was also used to help deliver food to people in quarantine and isolation.

The food pantry will also participate in the university’s Day of Giving for the second time on Feb. 11 and 12.

The food bank’s on-campus location has been crucial to reaching the people who need its services the most, especially during the pandemic.

“When you have so many students on campus and families that live on campus, it makes it easier for them to access that resource,” she said.

Torres said she was thankful for the town and university’s ongoing support for the food pantry. People interested in making a donation can find more information on its website.

“It’s hard for people to reach out for resources sometimes but that’s why we’re here,” she said.