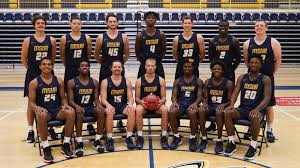 The Yellowjackets won their second straight exhibition contest, after defeating Yellowstone Christian College 92-84 on Saturday at home. “I thought we set the tone early, and we were pretty solid defensively all night,” said MSUB head coach Mick Durham. “It’s really nice in the second half when you can get some separation. They battled back, but our defense was really solid. All the guys who played contributed defensively, and I thought we really wore them down.”

On a night where MSUB led from wire-to-wire, the key stretch came directly out of the halftime break with the ‘Jackets ahead 31-26. The Bears kept it to a two-possession game until the 15:10 mark in the second half, before Chrishon Dixon hit a floating jumper and Nicholas Sebastiao added a 3-pointer to open up a nine-point advantage. Carrington Wiggins followed with a jumper at the 12:29 mark to give MSUB a double-figure advantage, and the Bears never got the deficit below six points the rest of the night.

“It started in the locker room when coach told us it was all about the first four minutes,” Wiggins said regarding the team’s strong start to the second half. “We just executed our defensive schemes, and hit big shots down the stretch.”

Wiggins finished with 17 points on 7-for-12 shooting, while adding three assists, a steal, and a blocked shot in 24 productive minutes. Junior Brendan Howard led all players with 24 points on 8-for-14 shooting, while adding five rebounds and a pair of assists. Dixon finished in double figures with 11 points and seven assists, and Brent Finn came alive to score 10 points while also chipping in a pair of rebounds.

“I was a little worried coming into the second half that we would see some zone, because obviously we haven’t seen that yet with this being our second game,” Durham said. “We finally broke them down and got them back into their man, but it was nice to get some reps against their zone.”

The Yellowjackets started the game on the front foot, building a 14-6 advantage over the first four minutes of the night. The eight-point lead was MSUB’s largest of the first half however, as the Bears managed to stay close all the way into the final 15 minutes.

MSUB finished the game shooting 41.9 percent (26-for-62), including a mark of 7-for-21 from 3-point range (33.3 percent). The ‘Jackets were solid from the foul line at 14-for-17 (82.4 percent), and won despite being out-rebounded 37-34. MSUB protected the ball well with just seven turnovers in the game, while the Bears committed 13 turnovers that led to 14 MSUB points. “It was a rivalry game, so we were already amped up,” said Wiggins. “We had to make sure we played good defense and team ball, and we got the victory.”

Emmanuel Ajanaku and Sebastiao provided a strong rebounding presence for the ‘Jackets, matching one another for the team lead with six rebounds on the night. Sam Elliott added four boards, two points, and an assist in 10 minutes off the bench, while Clarence Daniels and Jimmy Brown had three rebounds apiece.

“We still have a full year to develop, so it is all about gelling with the guys right now and playing hard,” said Wiggins after his second game as a Yellowjacket. “I am adjusting pretty well, and I’m still trying to get into the groove of things. It’s all about finishing strong, and if we play good defense then we should be a really good team going into next fall.”

THE BUZZ: Dixon was named the St. Vincent Healthcare Player of the Game.

NEXT WEEK: The teams will have a rematch in seven days, when the Bears visit Alterowitz Gym on Feb. 17. Tip-off is scheduled for 8 p.m. in the second game of a doubleheader with the Yellowjacket women. Live video will be available through the MSUB Sports YouTube channel online here, and live statistics will be available online here.

“It will be another battle at our place,” Durham said about next week’s rematch. “It will be nice playing at home next Wednesday, but Rocky isn’t going to go away. It’s a rival game, and we’ll see if we can’t get it done again next Wednesday.”