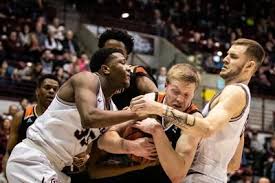 MISSOULA — NCAA Division I men’s and women’s basketball is slated to start Nov. 25 for the 2020-21 season, the NCAA said in a release Wednesday afternoon.

Various media reports had leaked out through the day that basketball was slated to return on that date and now it is official. Men’s and women’s basketball teams have not played since conference tournaments were shut down in March due to COVID-19.

“The date sounds reasonable to me and it gives us a little bit of time and I’m just excited we have a date to shoot for,” UM Athletic Director Kent Haslam said. “I think that brings a lot of peace and closure to our student-athletes, administrators and coaches.

“The next thing, though, is getting to that point. There’s still a long road to go to get to that point to play.”

The season originally was set to begin Nov. 10. Full practices can begin Oct. 14. The maximum number of regular-season contests has been reduced by four because the season will start 15 days later than originally scheduled.

With an official date now in place, men’s and women’s basketball teams can begin to finalize their non-conference schedules. UM interim women’s basketball coach Mike Petrino said the Lady Griz had four games scheduled between Nov. 10 and Nov. 25, and he’s not sure if they will get all those games.

The Big Sky Conference slate is set to start on or after New Year’s Eve, giving teams about a month to schedule non-conference games. It is a shortened 16-game conference schedule, which was released in late May.

Big Sky games were originally slated to start in early December. UM Senior Associate AD Jean Gee sits on the NCAA Division I Council, so the Grizzlies have had a little bit of solid information to work with throughout the process.

“We’ve heard rumors and all schools have been hearing rumors for weeks now and to have an official start date, that’s reassuring,” Petrino said. “We haven’t been able to release our (non-conference) schedule because we didn’t know if it would change or not.

“So it’s good to have a date, and I know our players are excited.”

The Lady Griz were originally slated to play a Pac-12 school, Petrino said, but that conference has said it wouldn’t hold any events until Jan. 1. He said there could be more clarity on that as soon as Thursday morning.

“I would summarize it as hypothetical, almost like simulating scheduling because no one knew for sure,” Petrino said of trying to pick up non-conference games over the summer and spring. “And no one knew, right? I felt like our administration was giving us the information as they got it.”

Now the focus for Division I teams will turn to filling out the dates on the calendar. There is still quite a bit of time before the season starts and Haslam said it will like be a “frenzy” to get those dates filled.

Now with the dates being the foundation, schedules can be filled out and the wheels that are turning college basketball forward are beginning to move.

“We haven’t had this kind of structure since we pulled out of Boise in March, we’ve not hard really any,” Haslam said. “We’ve operated for the last six months with a lot of how’s this going to look? Where’s it going to go? And so it’s nice to be able say here soon, who are are next opponents we’re going to be playing?

Haslam said there is a chance that the non-conference schedule might not be completed until November, as many different pieces will need to fall into place.

Teams will meet sport sponsorship requirements and be considered for NCAA championship selection if they play 13 games, which is a 50-percent reduction from normal. That is likely to account for the potential for games missed due to positive COVID-19 tests.

Basketball programs have been able to have light out-of-season basketball activities and the Division I Council approved a transition period between those and preseason practice. The transition period will occur between Sept. 21 and Oct. 13 to give student-athletes time to adjust.

“The new season start date near the Thanksgiving holiday provides the optimal opportunity to successfully launch the basketball season,” NCAA Senior Vice President of Basketball Dan Gavitt said in a release. “It is a grand compromise of sorts and a unified approach that focuses on the health and safety of student-athletes competing towards the 2021 Division I basketball championships.”

Teams will be allowed to participate in strength and conditioning activities, basketball-related meetings and skill instruction for up to 12 hours per week. Skill instruction is limited to eight hours a week. Players will be required to take two days off.

Basketball programs have been allowed a limited amount of time throughout the summer to work with their teams.

“We’re super excited about the November 25 start date,” Montana State men’s basketball coach Danny Sprinkle said in a statement to 406mtsports.com. “It’ll allow not just our seniors, but seniors across the country an opportunity to hopefully end their college careers with pretty much a full season. We know a lot of other sports have been impacted so far, so we feel very fortunate to be able to start pretty much on time.”

With dates set, the biggest unanswered questions now are who is playing who and what the basketball will actually look like this year. That’s what Haslam and every other athletic director around the country are trying to figure out.

“We’ve got to get our head around how basketball is going to look on campus,” Haslam said. “We need to now shift our focus to the size of crowds and those type of things, how we work with the county health department to make sure we’re staying within those parameters … we’ve got to work on our testing protocols, asymptomatic testing, mitigation plans and everything else.

“There’s still a lot of work that needs to be done.”