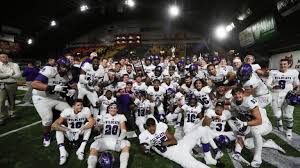 MISSOULA — The NCAA Division I Council has approved a change from 24 to 16 FCS playoff teams and a Sept. 21 start date for on-field practice.

The FCS Championship will run from April 18 to May 15, the NCAA announced Wednesday. Fall competitions can and will be considered when determining the field for the spring championship.

While this is a step forward, the Division I Board of Directors still needs to approve the championship framework. That group meets next week.

The fall practice slate will be the equivalent of what spring football looks like during a normal football cycle.

“It gives you structure, so that’s nice and it will look a lot like spring, fall ball. I think that’s a great description,” Montana Athletic Director Kent Halsam told 406mtsports.com and the Missoulian on Wednesday evening. “It’s just nice to see some normalcy return in the way that at least you’re seeing dates.

From Sept. 21 to Dec. 31, practices will be limited to 12 hours per week with a maximum of four hours per day of countable athletic activities. Two days a week must be taken off by football players.

Schools will be able to start their preseason or regular season during that period, in which case the normal rules during those periods will apply.

“The model ensures that legislative requirements mandating specific days/time off (for example, discretionary weeks) for student-athletes during a traditional season will apply in a comparable manner to a spring season,” the NCAA statement said. “The intent of the model is to allow maximum flexibility for conferences and schools, with an overarching goal of returning to the normal calendar for the 2021-22 academic year.”

Teams may start non-contact practices activities for up to 20 hours per week before the start of the preseason. The 20 hours can include up to eight hours of weight training, conditioning and film review with a two-hour maximum on film review.

“Schools conducting fall ball can’t have preseason practice (including any of the activities that are permitted in the two weeks before preseason practice) or competition before Jan. 1. Schools conducting fall ball during fall 2020 must follow the spring practice model (for example, 15 on-field practices within 34 consecutive days),” the NCAA statement said. “Before engaging in practice in the fall, schools must declare their first contest date.

“If practice must be paused due to the impact of COVID-19 on the team, missed days may be used later in the window.”

Fall ball and preseason practice must be separated by at least 30 days of non-contact activities. Rules regarding maximum contests limits and normal practice limitations apply.

Conference championship games are an option. Conferences will be allowed to start and end their seasons how they please.

“We can now back up from when we need to be done, build an eight-game schedule that we can shoot for now in  the spring,” Haslam said. “The lights are starting to come back on is the best way to put it.”