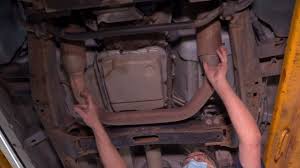 BILLINGS — Police are keeping busy tracking a new wave of thefts in Billings and it’s something that could end up costing victims a small fortune to fix.

Catalytic converters, a device found under the body of a vehicle and used to essentially clean exhaust, are disappearing at an alarming rate from vehicles all over town, sometimes being hit multiple times.

The Billings Public Works Department has seen its fleet of trucks broken into, gas lines cut, tanks emptied, and catalytic converters cut out all within recent months.

Debi Meling of the public works department says after numerous incidents she’s advised her team to move the fleet trucks around town and not park them in the same spot.

“Our staff parks at secure locations around the city. Unfortunately, the efficiency of our organization is reduced when we can’t have our equipment on site,” she said.

She says all the repairs have totaled over $5,000 in addition to a modification to their operations. And that’s not all.

Yellowstone County Sheriff Mike Linder says just last week a local salvage company reported as many as 30 catalytic converters being stolen off vehicles in their lot.

Linder says there was no indication if all were taken at the same time or over a period, but he says the case is very much under investigation as deputies follow up with recyclers in the area.

“It’s the platinum and palladium that is inside of those that is valuable,” said Lt. Brandon Wooley with the Billings Police Department.

Wooley says the police department has taken over 100 reports of stolen converters in the last six months and the devices get as much as several hundred dollars each.

“These recycling places take large amounts of legitimate converters, unfortunately, there is no requirement for these organizations to confirm identification or track who’s bringing these in,” said Wooley.

It presents a cat-and-mouse game for local law enforcement because the catalytic converters have no serial numbers or identifying features manufactured into them.

“You can’t indicate that one belongs to any certain vehicle,” said Wooley. “But this all kind of falls back to some of the drug trade a little bit as people are stealing this stuff to get money to support some type of habit.”

Here’s how officials suspect it’s happening. A hand saw is used, usually at night, according to Wooley, by a thief who crawls under a high-clearance vehicle to cut off the converter in just a matter of minutes.

“We do have a group of individual vehicles maybe parked on the street, but the larger portion of the vehicles are some type of fleet vehicles where several of them (are) parked outside of a business or a commercial location,” he said.

Rarely is the thief seen, and if someone does hear a strange saw sound rarely to do they know what they’re hearing is a crime in progress.

However, when someone goes to start their vehicle again and realizes something is wrong it’s often too late.

“I’ve had customers of the cars have the converter stolen off them at Rimrock Mall while they’ve gone in to get something in the mall and come back,” said Terry Collette, owner of Silent Knight Custom Exhaust. “And honestly, it takes these guys anywhere from 90 seconds to two or three minutes.”

Collette has never seen such a rash in converter thefts before. In fact, the repairs are backing up his supply chain with some 140 customers needing a new converter in the last six months.

“I’ve been having to draw them out of California and out of Texas,” said Collette.

He says the worst part about all of this is that local charities are getting hit.

“A couple of the local church vans have gotten hit. I mean that is reprehensible to steal from charity or churches,” he said. “I mean it’s bad enough, they’re stealing from regular people, but when you’re stealing from people least able to afford to pay it.”

So here’s how police say residents and commercial businesses should protect themselves: Keep security cameras rolling, park in a garage if you can, and Wooley even says because thieves are crawling beneath vehicles to access the converter it’s a good idea to try and block access by parking close to a building or another vehicle.

He also says people should watch for suspicious activity.

“Because these catalytic converters and the exhaust systems are so big, they’re not going to be putting them in a car, they’re going to be (placed) into the back of some type of large vehicle,” he said.

So essentially, also watch for strange vans or pickups lurking in lots and as always Wooley says call police to report a theft or strange activity.
Related Topics:
Up Next

Billings Police Looking for ‘Person of Interest’ in Homicide