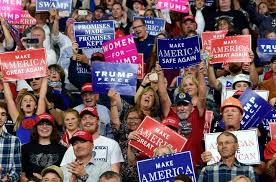 BILLINGS, Mont. – We’ve seen protests all over the state from Missoula, Bozeman and Great Falls, one is now set to take place in billings.  After speaking with this weekends event organizers, they say the event is meant to be a peaceful demonstration.

The Facebook event page for Sunday’s rally has over 900 people who say they will be in attendance and almost two thousand others say they are interested in attending. The Billings community is coming together to hold what may be the biggest rally we’ve seen thus far in the treasure state.

After feeling the initial shock from George Floyd’s death, Amber Palmer was disappointed to see there were no protests in Billings. Palmer took it upon herself to organize to the rally in hopes of getting community voices heard.

Although violence has sparked during protests in other states Palmer says she has the support from the Billings Police Department to maintain the safety of everyone in attendance.

“We do have great allies in the police officers who definitely are going to be there for us, we have people in the crowd that are going to be watching, so if anything is to happen it’s going to be nipped in the bud, right then right there and it will not be allowed to escalate any further.”

Business owners downtown say they aren’t concerned about any damage to their property. Lil’ market manager Lisa Whine says she understands people are just trying to get the message out.

“I think it’s wonderful. Some things do need to change and I’m hoping that, Montana’s been an example in the past for the quarantine and such and I think we can continue to do so.”

Taylor Arnold, co-event organizer and a mother of two young boys says she’ll be bringing her seven year old son to show him the importance of being apart of the solution.

“Just with seeing that video and having two little boys myself and knowing that this is something that has gone on in just my generation, but have gone on for a while and knowing that there is racism in Billings I’ve felt like I was called upon to take action and do something whatever it may be.”

Although rumors have circulated that Antifa groups may be in attendance Arnold has this advice for anyone that’s concerned for their safety.

“We need to drive the darkness out with light, which is what I think we’re doing right now. That message was quoted by Martin Luther King Jr. and that’s the biggest thing I’ve been holding on to.”

Palmer’s hoping Sunday’s event is not only peaceful but also an opportunity for the community to become tight knit.