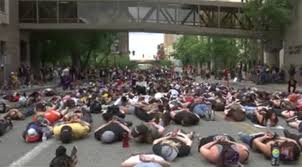 BILLINGS, Mont. – Sick and tired, emotions over a thousand citizens express as they fill the lawn of the Yellowstone County Courthouse on Sunday. People from different ages and nationalities all stand in solidarity for the black lives matter movement.

While crowds chant “black lives matter” and “no justice no peace”, one mother says she’s proud she brought her young children to witness this moment in history.

“I thought about and I decided that, you know, I am white and I am in America and I don’t really have to sacrifice anything and so if a small sacrifice is bringing my children to this even though there might be a little danger, I’m willing to do that because they need to see and they need to be apart of it,” Jennette Rasch.

Tears flow as one mother expresses how she just wants her son to make it home safely at night.

“We are over this, we are tired of people putting their boots on our necks. We are tired of being scared because I have to tell my nine year old to watch out because that person who is coming to my window might point a gun at me, It is over. I’m tired of having to tell my children that you don’t know if the person that’s going to protect you is going to be the one that kills you.”

Armed citizens line the streets as they watch the event. We spoke with one U.S. Veteran who says he has fought for the right to protest and showed up  to make sure nothing gets out of hand.

“We would hate to see any violence or anything come to our community and we’re down here peacefully observing,” says Brian Huston.

Throughout the afternoon protesters marched around the police department and laid on their stomachs for eight minutes and 40 seconds to honor George Floyd and even when the weather took a turn they didn’t let the rain and hail stop them from speaking out against police brutality.

One of the event organizers Amber Palmer posts on Facebook how proud she is of the community here in billings and how the happy tears have not stopped flowing after today’s event.