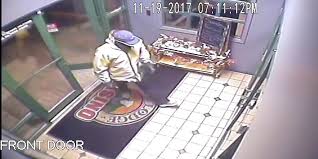 According to the Billings Police Department, officers were called to the Maverick Casino at the corner of 14th Street West and Wyoming Avenue about 10:11 p.m. for a reported armed robbery.

The suspect is described as a lone Native American man, believed to be in his 20s, about 5’9″, and 150 lbs. According to police, he was wearing a mask, a blue coat with a hood, a black beanie, jeans, and was carrying a handgun.

Police say they are currently investigating and that there is “no perceived threat at this time.”