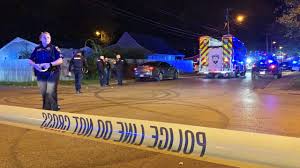 BILLINGS, Mt. – Law enforcement is currently looking for a suspect who fled the scene of a shooting at an apartment building on Monday evening.

According to Sergeant Becker with the Billings Police Department, they received a call about a shooting in the 200 block of Prickett Lane. Upon arriving they found a male victim who was shot in the chest.

Witnesses tell Billings Police they saw two men shot the victim before fleeing the scene. Becker says they believe the two men hid in a dumpster on the 200 block of Moore Lane and possibly changed their clothes.

Officers were able to arrest one suspect. BNSF Police assisted Billings Police by using a drone to help locate the other suspect. The drone uses infrared lights and heat sensors to locate individuals.

Billings Police Department is currently looking for a male suspect who fled on foot.