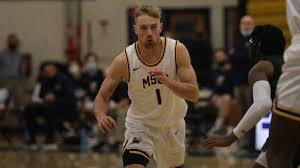 BILLINGS, Mont. – Getting set for a pair of games this week, the Montana State University Billings men’s basketball team is scheduled for one home contest and one on the road.

The Yellowjackets will host Rocky Mountain College on Wednesday evening at 8 p.m., in the second game of a doubleheader with the MSUB and Rocky women’s teams. Live video for Wednesday’s game will be available online here, and live statistics will be available online here. Per Great Northwest Athletic Conference mandate, no fans are allowed at MSUB home basketball games during the 2021 spring season.

MSUB will then travel to Pocatello, Idaho, for an exhibition contest against NCAA DI Idaho State University on Saturday. “It’ll be a great experience,” said MSUB head coach Mick Durham on the game against the Bengals. “It will be the first time we have really gone on the road together as a team, and it’s not going to be easy. This is kind of the way the scheduling has gone this season, and we were fortunate to pick up the game this weekend.”

The game against the Battlin’ Bears will be the first counting contest for the ‘Jackets this year, while the game at Idaho State, which was a recent addition to the schedule, will be an exhibition affair. Live coverage for Saturday’s game against the Bengals, which is set to tip off at 4 p.m., is available online here. “We expect the best from Rocky,” said Durham. “It’s our rival and it’s our second time playing them. It was a battle over at their place a week ago, and we expect the same thing here.”

The Yellowjackets last played on Feb. 10, picking up a 73-56 victory in a road game against Rocky, after opening the season with a 92-84 home win over Yellowstone Christian College on Feb. 6. “It was good to come out and improve on a lot of the things we needed to improve on,” senior guard Brent Finn commented on the team’s most recent win over Rocky. “We still have a lot to work on for sure, but we are definitely headed in the right direction.”

WIGGINS PRODUCTIVE IN MSUB DEBUT: Over the first two games of his Yellowjacket career, Carrington Wiggins got off to a good start reaching double figures in each contest. After scoring 12 points and adding five rebounds and three steals in the opener, Wiggins improved his shooting going 7-for-12 for 17 points in the game against the Bears.

HOWARD THE LEADING SCORER: After ranking second in the GNAC with 20.3 points per game during the 2019-20 season, junior Brendan Howard is the team’s top scorer once again this spring. Howard has scored 53 points over the two exhibition games, making 18 of 31 shots (58.1 percent) including a mark of 66.7 percent from 3-point range (6-for-9). Howard is also averaging 6.0 rebounds through the first two games, and is a perfect 11-for-11 from the free-throw line.

FINN FINDING HIS WAY: Senior newcomer Brent Finn, who has earned the start in each game this year, also reached double figures with 10 points in the win against the Battlin’ Bears. After redshirting last year at Montana State, Finn is back on the court for the first time since the 2018-19 season. “I have been in a lot of different situations and played at three different levels, and that helps,” Finn said on entering the MSUB program as a senior. “I just try to do the best I can to help especially the younger guys who haven’t played in college before.”

“Brent comes in with a lot of experience and maturity, and he’s the only senior on our roster right now,” said Durham. “He’s one of our best athletes and is very explosive. I’m looking forward to seeing his growth here in our program.”

DIXON DRIVES THE OFFENSE: Sophomore point guard Chrishon Dixon played a well-rounded game last Wednesday, and was the key facilitator in helping the ‘Jackets win on the road. Dixon led all players in the game with seven assists, while adding 11 points, four rebounds, and two steals. He committed just one turnover while playing 38 of 40 minutes. “Chrishon gained tremendous experience last year starting and getting good minutes, and he has done a really nice job of leading us,” Durham said. “He is going to play big minutes. He definitely deserves them, he works hard, and he’s doing a little bit of everything.”