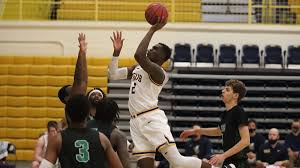 BILLINGS, Mont. – Coming off a win in its 2020-21 season debut on Saturday, the Montana State University Billings men’s basketball team is set to square off against crosstown rival Rocky Mountain College in its next game this week.

Tipoff against the Battlin’ Bears is set for 7 p.m. at the Fortin Center on Wednesday, as the men will play the second game in a doubleheader with the women’s teams. A live video stream of the game will be available online here and live statistics will be provided online here. No fans are allowed in attendance at Wednesday’s game.

“It’s our rival game, and I know our guys will be excited,” said MSUB head coach Mick Durham on the upcoming contest against the Bears. “The most important thing is that we see some good strides between Game 1 and Game 2. It will definitely be very competitive, and we will have to go over and compete for 40 (minutes).”

Wednesday will be the first of two games scheduled against RMC this season, with the teams reconvening next week on Feb. 17 at Alterowitz Gym. The Yellowjackets enter the week with momentum, after knocking off visiting Yellowstone Christian College 92-84 in the opening game of the abbreviated season on Saturday at Alterowitz Gym.

“I think it’s about what we expected,” Durham said regarding the team’s first game of the year. “There were a lot of good things, and a lot of things we need to clean up. It was great for us to have some competition and for us to get our guys out there. We faced a little adversity getting behind in the second half, and had to fight through that. I was pretty pleased, and now we need to build on that.”

Returning all-conference forward Brendan Howard was the headline player in Saturday’s win, as he scored 29 points while adding seven rebounds in his 31 minutes on the floor. Howard made 10 of 17 shots – including 4 of 6 threes – and connected on all five of his free throws to help lead MSUB to the win.

The Yellowjackets also saw promising play from their cast of newcomers, who were highly influential in the victory. Sophomore center Jimmy Brown narrowly missed a double-double in his first-ever MSUB game, as he scored a dozen points and led all players with nine boards in 23 solid minutes off the bench.

True freshman Nicholas Sebastiao chipped in 15 points including three 3-pointers, and grabbed four boards while adding two steals and committing zero turnovers. “Jimmy brings a little more experience with a couple of years at the junior college level,” Durham said. “Nick is a true freshman and for him to come in and shoot the ball like that and to give us a physical presence too was great to see.”

“I was really proud of them, especially Nick,” sophomore Clarence Daniels said when asked about the performance of the team’s newcomers in Saturday’s season opener. “He’s a freshman coming out of high school, and he had a real good debut. Jimmy hasn’t played (a game) in two-plus years, so he was really excited to get out there too.”

Daniels, who saw action in all 30 games as a freshman in 2019-20, also made his season debut scoring four points and adding a steal. “I was very fortunate to be out there playing as a true freshman, and I learned a lot especially in this conference,” Daniels said regarding his debut campaign as a Yellowjacket a season ago. “Hopefully the new guys here learn and pick up on things, and me being a second-year player I try to give them advice or tips I wish I would have known last year.”

“Clarence got some good experience with about 10 minutes per game last year, and he’s playing a little bit more on the perimeter this year,” Durham commented on the sophomore. “He’s one of the guys I think this year is great for. This is a year for him to grow and mature, play at a couple of different positions, and experiment with a little bit. His role is important, both in getting offensive boards and being a slasher and also being one of our better defensive players.”

The Battlin’ Bears are 1-11 so far this season, with their lone win coming against Montana Western on Jan. 5 in a home game. Since then RMC has lost 10 straight games all against Frontier Conference opponents. The Bears are coming off a pair of losses at UMW last weekend in Dillon, and are scheduled to play Montana Tech twice this weekend after the mid-week affair with the Yellowjackets.