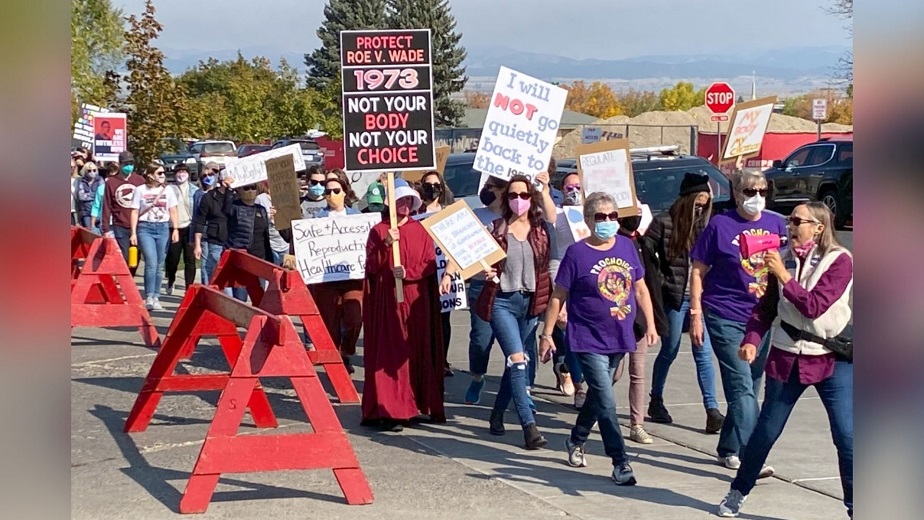 Helena, Montana – Around 400 protesters gathered at the Montana State Capitol on Saturday to criticize restrictions on abortion rights.

They took part in a “March for Reproductive Rights,” one of hundreds of events held across the country as part of the Women’s March on Washington. Participants marched around the Capitol at midday, waving signs and singing slogans such as “Stand up, fight back, reproductive rights are under attack.”

“Us as women all have to fight for our rights together,” Ella Stoddard said, a student from Helena who attended the rally.

People spoke against dozens of new abortion-related laws passed by the Montana Legislature this year.

“We need equality, we need equity restored into our families, our communities and our country,” Marci McLean said.

Three of the new laws, which would prohibit abortions after 20 weeks of pregnancy, limit access to abortion-inducing medicines, and require doctors to ask women seeking abortions if they want to hear the baby heartbeat, were scheduled to take effect on Oct. 1. This Monday, a court in Billings placed the laws on hold temporarily.

State Rep. Mary Ann Dunwell, D-Helena, told a personal story at the rally. She chose to have an abortion as a young woman living in Louisiana, and traveled to Texas to have the procedure because there were no providers closer to her.

“I felt shamed. It was a tough, tough decision I had to make – but, you know, it was my decision. We need to protect that right for all of you, for all of the young women,” State Rep. Mary Ann Dunwell said.

Participants at the protest said that the fight over these measures will continue.

“It warms my heart, honestly, that a lot of people are fighting for women’s rights, because we need it. It’s amazing,” said Stoddard.

Marches were organized on Saturday throughout the state also in Whitefish, Missoula, Great Falls and Billings.

There have also been protests calling for a stop to all abortions. Activists started their 40 Days for Life fall vigil last month. Outside businesses that support or offer abortions, demonstrators have gathered to pray for a stop to the practice.

Non-profit organization donated jackets to kids in need in Billings

Bozeman man arrested after pointing a gun to several people