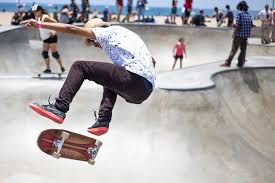 A skateboarder was struck by a vehicle and injured near the skate park in downtown Billings Thursday afternoon.

The 10-year-old boy was heading east on Minnesota Avenue just before 1 p.m. when he cut between stopped northbound cars at the intersection of South 27th Street, Billings police wrote in a tweet.

He was struck by a vehicle heading north of South 27th Street when he emerged into a clear lane.

Police said he suffered a minor injury and was transported to a local hospital.