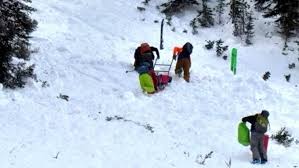 BIG SKY, Mont. — The principal of an elementary school in Bozeman has been killed in an avalanche while backcountry skiing in southwestern Montana, Gallatin County officials said.

Craig Kitto, 45, and a companion were skiing in Beehive Basin near the town of Big Sky on Sunday when they were swept down a slope into trees, the sheriff’s office said. One man was uninjured and called 911 when he heard Kitto calling for help.

Kitto sustained multiple injuries from being dragged into trees by the avalanche and was partially buried in snow, the sheriff’s office said. Rescuers evacuated him to Big Sky Medical Center. He was subsequently flown by helicopter to Bozeman Health Deaconess Hospital where he died of his injuries Sunday night.

Kitto has been the principal of Whittier Elementary School in Bozeman since 2018 after serving as a school administrator in Buffalo, Wyoming, the Bozeman Daily Chronicle reports.

The Gallatin National Forest Avalanche Center says the two men were making their way upslope when they felt the slope collapse and saw cracks spreading around them.

Skier dies after falling into tree well at Bridger Bowl